I began this Retrospective of The Sword back in September of 2010, after the release of Warp Riders, but after a strong beginning, the article fell by the wayside. Although I was excited as hell to listen to the new album, for some reason I didn't get around to it until December. By that point I had been writing reviews like mad, trying to get everything I wanted to listen to heard before the end of the year, so I banged out a review for Warp Riders and that was that. Well here we are in February and I re-discovered this half-finished article. And because I've been banging through CDs like crazy I figured I could take a couple of hours out of my morning and finish the Retrospective.

I was lucky enough to see The Sword when they opened for Clutch about two years ago now. It was in support for their (then) new album, Gods of The Earth, and they ripped it open. At this point I hadn't heard much of the new album (if at all, I didn't even know they were opening for Clutch until the day before), and only knew the words of two of the songs off of Age of Winters (just like now), but I still had a good time. I have that concert written down somewhere, I should find that and post it up here...if I ever find it that is. 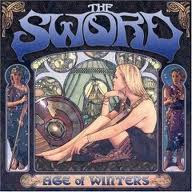 I'm not going to lie, the only reason I even heard of this group and their fist album, Age of Winters, initially is because of Guitar Hero. Having "Freya" as a playable track was a great idea by this band, and the song became one of my most played of the game (even though it was hard as hell to pull off). Well, however I heard it I was in love with the sound. Their blending of doom vocals with a more upbeat musical sound (which I later heard called stoner and I agreed) was pretty new to me at the time. Although I have heard this album several times, I have the hardest time understanding what the fuck the singer is saying. The only songs I know any amount of words to is "Freya" (guess why) and "Barael's Blade." That's it. The rest is a jumbled mess of wailing and guitars. But it still blasts my ear-drums and I love it. Some of my metal friends can't stand the singer's style, but I like the uniqueness of it all. Other stand-out tracks include "The Horned Goddess" and "March of The Lor." As a side note I like the pseudo-folk of their music too. I know it's not folk metal in the least, but the songs (at least by the titles and what little of the lyrics I can pick out) sing of the folk/power metal symbolism of war and ancient gods. I feel that this adds to their charm for me. 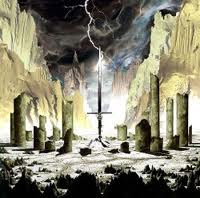 Their highly anticipated follow up to Age of Winters did not disappoint. To me an even more solid album, Gods of The Earth takes the sound of their debut album and cleans up the melding of vocals and guitars. While the lyrics of this album are still difficult to make out, they are at least possible to comprehend. Songs like "How Heavy This Axe," "Fire Lances Of The Ancient Hyperzephyrians," and "Maiden, Mother & Crone" continue the quasi-folk doom style. This album seems more power metal oriented then their debut was, it puts off a fuller sound, as if they added a couple of members to the band. While the songs that are listed above are my favorites, I can't find fault with a single song, aside from maybe the intro track, but those are never ment to be taken seriously, the rest are grade-A gold. Gods of The Earth is my favorite release by The Sword, with it's epic instruments and vocals continuing through, but this time seeming like something more grand has been added.

Warp Riders - 2010
I originally wrote this article (and more, see the full article) as part of my epic December, to finish out 2010. I trimmed it a bit, to better fit this format (didn't need all of the info about the band an whatnot), so don't be surprised if this sounds repetitive. 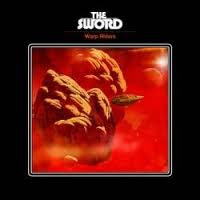 Warp Riders begins with a wall of sound, like a sonic sledgehammer splitting your skull. "Acheron/Unleashing the Orb" is an amazing instrumental song - instrumental done right - that spells out the rest of the album superbly: this is an album to rock-out to. The whole album is one to rock out to; track after track of trudging guitars, great drums (shitty he quit the band) and epic lyrical content. One thing I did notice is that Warp Riders is a lot more rockin' then the previous releases, with mixed sucess. It's not so solidly in the stoner/doom metal genre, instead opting for being a more straight-forward stoner album. Another key point to make, you can actually understand the singer! Instead of his never-ending wail of a voice (which is not a complaint), on this release the notes that he sings are shorter, lending to this understandability. There are songs and parts that he takes up his wail-mantle like the days of old, but this new development adds to the layers of the album. Oddly, even with this new added level of variance, the songs I really enjoy are the ones that more uphold the older style of The Sword ("The Warp Riders"), or on the complete flip-side, the songs that have an almost thrash quality to them ("Astraea's Dream"). The songs in the middle of the styles (most of the record) just don't do it for me, they rock, but not in a stand-out kind of way.
By The Klepto at 10:49 AM
Email ThisBlogThis!Share to TwitterShare to FacebookShare to Pinterest
Tags: *Retrospective, #Stoner/Doom, The Sword