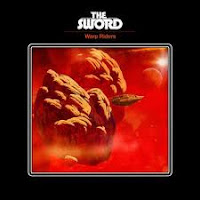 I don't know why I put this one off for so long, I loved the past two albums by The Sword, and I was ecstatic to finally get my copy... but for some reason it just never happened. I started to write a Retrospective for the group, going back to Age of Winters, then onto Gods of The Earth, then finally to Warp Riders, but that got stalled after just the first album. I will finish the article that I have half written, but that's for a later date and I really want to listen to this album before the end of the year.
I saw The Sword live about two years ago, opening for Clutch (my favorite band), and it was a surprise - mostly because I didn't think to look at who was opening the show - but also because I hadn't expected the group to jam as hard as they did. It was just as hard to understand they lyrics live as it is on their album (at the time having just released Gods of The Earth), but the band was amazing. I jumped with the crowd, I sang along to the two songs I knew the words to ("Freya" and "Barael's Blade"), and I moshed with the numerous fans of The Sword and Clutch. Good times. I have high hopes for this album.

Warp Riders begins with a wall of sound, like a sonic sledgehammer splitting your skull. "Acheron/Unleashing the Orb" is an amazing instrumental song - instrumental done right - that spells out the rest of the album superbly: this is an album to rock-out to. The whole album is one to rock out to; track after track of trudging guitars, great drums (shitty he quit the band) and epic lyrical content.

One thing I did notice is that Warp Riders is a lot more rockin' then the previous releases, with mixed sucess. It's not so solidly in the stoner/doom metal genre, instead opting for being a more straight-forward stoner album. Another key point to make, you can actually understand the singer! Instead of his never-ending wail of a voice (which is not a complaint), on this release the notes that he sings are shorter, lending to this understandability. There are songs and parts that he takes up his wail-mantle like the days of old, but this new development adds to the layers of the album.
Oddly, even with this new added level of variance, the songs I really enjoy are the ones that more uphold the older style of The Sword ("The Warp Riders"), or on the complete flip-side, the songs that have an almost thrash quality to them ("Astraea's Dream"). The songs in the middle of the styles (most of the record) just don't do it for me, they rock, but not in a stand-out kind of way.

Warp Riders is a solid release by a solid band, but I expected more. They attempt to evolve their style, from their traditions of doom, into rock-hard stoner. For some songs it works - and it's great to see a band trying new things - and for others it doesn't. While a lot of people will probably have The Sword on their 'Best of 2010' lists, I cannot do that with a clear conscience. I like the evolution, but now I want to more, take the good qualities and head in that direction. Make my 2011 or 2012 lists! I am waiting...
By The Klepto at 12:00 PM
Email ThisBlogThis!Share to TwitterShare to FacebookShare to Pinterest
Tags: *New Album, #Stoner/Doom, The Sword

Hey man, great review of Warp Riders. It is an outstanding album. I was lucky enough to catch them a few weeks ago in NC. And speaking of Clutch, they're playin' a New Years Eve show at the same venue.

Also, I recently started a music blog. Check it out if you get time. I dig your blogs and would respect your opinion. Thanks.

Yea, they put on a decent show, and I love me some Clutch.
Thanks for reading and commenting. I'll check your site out time to time. Keep it up!