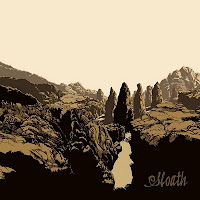 This one will be short and sweet: Sloath's debut (aptly titled Sloath) is a droning/doom look into psychedelia. The album is forty-four minutes long, and only three songs - that should tell you the type of music we are dealing with here. And while there is nothing that truly stands out from this album (the crux of epicly-long songs) it still is one of the best of the drone genre that I have ever heard. While at times it does tend to get a little dull, it is by no means boring. There isn't the incessant repeating line over-and-over, there isn't huge sections of nothing, or just background fuzz or just the sound of a guitar repeating on itself perpetually, it's just not there. For a band that only uses six riffs (so the reviews say), their music stays fresh (at least semi) throughout this epic album. There are almost no lyrics, and what little that are there are incomprehensible, but seem to be focused as another instrument into the mix, but this doesn't take away from the music, it only benefits.
This album is crazy, not something I would normally rave about. It probably wont get a lot or repeats on my playlist, but sometimes that is ok. Their music is still out there, and here I am spreading the good word myself. If you want to read more, from people who go into better detail, check out these great reviews at The Soda Shop and Doommantia, some of the best.
By The Klepto at 12:00 PM
Email ThisBlogThis!Share to TwitterShare to FacebookShare to Pinterest
Tags: *New Band, #Doom Metal, #Drone, #Stoner, Sloath