Tribute Series: Hammer of The Gods

As I was researching the horrible news of Mike Pornoy leaving Dream Theater I stumbled upon a series of tribute shows he, and several other musicians, took part in in the 2000's. I have not been listening to these in order (instead opting to listen in the order that most appeals to me), and so will not be reviewing them in order, but they are pretty sweet, and fairly unknown. So I think they deserve some sort of mention. 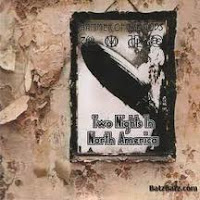 Continuing with the thread of amazing tribute bands, Hammer of The Gods is a tribute to the granddaddy of them all: Led Zeppelin, and is made up of Paul Gilbert (Racer X, Mr. Big), Daniel Gildenlöw (Flower Kings), Dave LaRue (Dixie Dregs) and Mike Portnoy (Dream Theater).
After a lackluster representation of Rush, and a pretty damn good version of The Who, this version of Led Zeppelin is probably the best of the series so far. While the music isn't as tight as I'd like it to be, we can probably blame that on the live setting, and most likely the quickness of the project itself. All of the musicians present are different shades of amazing (with some more-so then others; Read: Mike Portnoy is amazing!) and do a great job with it. The vocals aren't dead on with Jimmy Page's, but who would expect them to be? They still hold true to the Zep sound - good enough for me anyway.

With this release being two discs, the song selection encompasses all of the groups mega-hits, and contains a few of their lesser-known works as well - good for any level of fan. It's got the standards; "Black Dog," "Houses of The Holy," "Misty Mountain Top," etc. But it also contains some stand-outs, songs that the original band played exceptional live, and Hammer of The Gods follows suit. They play a twenty minute-plus version "Dazed & Confused" mixed in with a medley, "The Ocean" in full form (with an impressive drum solo of course), and an on-par (or exceeding) version of "Moby Dick" - including the loooong drum solo. Basically it's everything you would want out of a Led Zeppelin concert... minus Led Zeppelin.

The bottom line of this review is this: if you like Led Zeppelin then you will like Hammer of The Gods. It is good as any live album of Zeppelin that I have heard, and although it isn't truly Zep you are hearing, you can close your eyes and make believe. It is close enough to the original group (minus the occasional sour note via vocals) to believe. While I wouldn't pay a huge amount to hear a Led Zeppelin tribute - but I would for an actual reunion tour - this was a good use of my time; as good as any new album could have been.
By The Klepto at 1:30 PM
Email ThisBlogThis!Share to TwitterShare to FacebookShare to Pinterest
Tags: *Tribute Series, ^Classics, ^Cover Songs, Led Zeppelin