Again, to give another look from The Pyro's point of view ...Imperfect Harmonies. 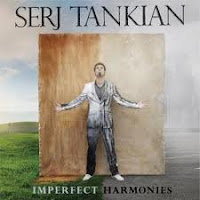 While it is an obvious fact that Serj Tankian was the leader of System of A Down, it is also evident that he was not the whole picture. His style is a definite throw-back to the days of SoaD, although it is not the same. I can't help but compare Imperfect Harmonies with Elect The Dead, try as I might. While within Elect The Dead, he strived for a stand-alone style (at least partially), mixing his really eclectic style with the alternative metal scene, with Imperfect Harmonies all of the originality (and eclecticness) has pretty much vanished. It's an album of dull, radio-friendly songs, attempting at being political but falling from the mark. It's not even a throwback to SoaD, it's just doesn't have the energy to compete with Serj's history.

Only three songs could I ever see listening to again, and even that is a bit of a stretch. "Boarders Are...," "Gate 21," and "Wings of Summer" all were at least sort of catchy. The rest of the tracks faded into insufferable drivel in the background of my crappy apartment. Not even the fact I was drinking at the time could raise up the standard of this album. Imperfect Harmonies will probably not be gracing my speakers again any time soon.

While I haven't listened to the other offshoot acts from the guys of SoaD, like Scars on Broadway or AcHoZeN (stupid name), I did like Serj Tankian's attempt at making his own way. I really like his voice, and for at least one album he was showing promise, but with Imperfect Harmonies he took a step backwards, trying too hard for a message, not worrying about the music as a whole. Often times solo acts tend to get caught up in their own game, as if they need the rest of the band (the official members, not the backing group) to weigh the pros and cons of any and all ideas. This is something that I think would benefit Mr. Tankian greatly. Re-form System of A Down, you've all proved that you are musicians on your own, but now it's time to combine to form the way better group then anything solo, and continue on that path.

Stand outs include "Boarders Are...," "Gate 21," and "Wings of Summer."
By The Klepto at 12:00 PM
Email ThisBlogThis!Share to TwitterShare to FacebookShare to Pinterest
Tags: #Alternative Metal, #Progressive Metal, Serj Tankian, System of A Down