An Apology For The Holidays

So I have been slacking. First it was projects then it was finals. Now it is Christmas and I am off on adventures. Tomorrow I leave on a 4 day cruise for the Bahamas, then I am back in Orlando for 2 days and then back to my parentals place for the Christmas weekend. So although I wanted to get another article out (I have done nothing in over a week, sorry no Guns N' Roses articles) I didn't. When I get back to society on the 29th I will try to bang a few out, but no promises. The lack of school really makes my drive for articles go away. It's odd really...
By The Klepto at 3:46 AM No comments:
Email ThisBlogThis!Share to TwitterShare to FacebookShare to Pinterest

Ok, yet again to "borrow" information from MetalMartyr.com, I present to you IGN's The Top 10 Doom Metal Bands. After checking out the article on MM and reading through IGN's List, I began to leave a comment on the article at MM, and 20 minutes later I had several paragraphs written. So I decided to cop-out and use this for my own needs. Sorry MetalMartyr but we all help out each other right? (I hope so anyway).

Now, I am a fan of this genre, but even I can't listen to it all the time. It's too moody. I have to either be in a really good mood or a really bad one in order to stand more than one song.
This list on IGN is decent, and it does highlight some of the genre's greats, but then overlaps them with bands who have only one or two doom albums, or who mash genres together which really doesn't make it "Doom" anymore.

Their list in no order (I hope):
So, while the IGN list isn't a bad one, there are some bands that I feel should not be included. If you are making exceptions for cross genres like Death/Doom or Sludge Metal, than you need to include better ones to it.
Thanks to MetalMartyr.com
By The Klepto at 1:37 PM 3 comments:
Email ThisBlogThis!Share to TwitterShare to FacebookShare to Pinterest
Tags: *Awesome Websites, #Doom Metal, Candlemass, Earth, My Dying Bride, Paradise Lost, Pentagram, Saint Vitus, Sleep, Trouble, Type O Negative, Witchfinder General

Rant: 20 Cover Songs That Are Better Than The Original

So there are alot of covers out there. Most of them are utter shit. Either they are direct copies of the originals, or they try to put a creative spin on them that send down the spiral of hell. However, every so often a truly great cover comes along, a song that is so awesome that I cannot enjoy the original song nearly as much as I did before. Some of these are great songs covered by great bands, and some are crappy songs made great. This is my list of those songs:
By The Klepto at 6:07 PM 3 comments:
Email ThisBlogThis!Share to TwitterShare to FacebookShare to Pinterest
Tags: *Rant, #Alternative, #Blues Rock, #Doom Metal, #Heavy Metal, #Industrial, #Power Metal, #Southern, #Thrash, ^Cover Songs

I love finding new music, and I love even more to find new bands. Some people may have heard of Black Tide at this point, they had a very successful Ozzfest tour in 2007 (which I went to) and have their album, Light From Above, out for 9 months now, so they are growing in popularity and known.

Now, not to brag (lies) but I found these guys before all that. Months before the start of the Ozzfest tour, when I decided to go, I went and researched all the bands performing (because that's what kind of music geek I am), to find those that I know I'll hate (the screamers) and try to learn some of the music of the groups that aren't bad. This is how I found Black Tide. At the time they didn't have any album out, and not even an EP per se, they just had their MySpace. I listened to said MySpace, liked what I heard and added them as a friend (I no longer have a MySpace because I would like a job one day), to keep updated.
Time passed, and I forgot about these small-time artists who had a lucky break. Later, while I was on MySpace one day I saw a bulletin from them that caught my eye. Apparently, because all of this band's members were under the age of 21 (I think the oldest was 18 at the time) they were being kicked off the tour. See, the second stage (where these guys were opening) was hosted by Jägermeister, and they had a problem with a bunch of underage kids playing on their stage. So they were off the tour, and a little pissed (as would be expected).
About a week passed and I saw another bulletin, a 180 on the previous one. It seems that Ozzy, the man himself (with probably a push from his wife), thought that what was happening to these guys was crap. So he decided to bump the band up to opening for the mainstage, a honor usually held by those bands who have been around for over a decade. So Black Tide jumped from being a no-body band that most people would miss (I rarely make it in time for the first band, especially for Ozzfest), to the openers for the mainstay of metal.
So they went on to play a great show (I guess, I really don't remember, with 14 hours of metal, it all seems to blur together. But they weren't bad, I would have remembered that), and released their debut album shortly after. The album did alright, breaking the Billboard Top 100, landing at 73, not to shabby for a debut band and album within the metal community.

I have the album (obviously) and I think that it is great. They do a cover of Metallica's "Hit The Lights" and don't suck at it. As I was listening to it, it struck me that they are a mix of the golden-age Thrash, reminiscent of Metallica, and NWOBHM, with Judas Priest-esq vocals and lyrics. My favorite song, by far, is "Warriors of Time." It's a simply-lyric'd song, with only one real verse and alot of guitar-work, but it keeps me enthralled, and my the hair on the back of my neck prickles every time I get to their haunting voices chanting "We are the warriors, the warriors, the warriors of time!" This disc is a must have for anyone who enjoyed the days of Iron Maiden but wants a little more of a kick. 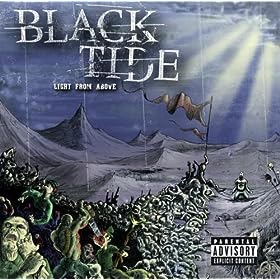 Black Tide - Light From Above

Albums Listened To In November

Another month is done, and with it comes my list of albums listened to. This month started out very bright, with over 25 albums listened to in the first two weeks, I thought I would do better than October (50 albums), but within the end of November, the numbers started to slack. To many bands, not enough time. Plus my epic playlist took up some of the time.
Only 40 albums this month (not counting my Epic Playlist)

My favorite newly listened album of the month: Paint By Number by 3. I really enjoyed the mix of traditional Progressive Rock and Funk Rock. It completely switches feel after the first three songs. It was unexpected and I loved it! Favorite song: You Call Me Baby
Honorable Mention: The Honeydrippers - The Honeydrippers: Volume One. A surprise find of some of rock's greatest performers playing covers of songs from the 40's and 50's.

My least favorite newly listened album of the month: Hopkins (The Whitchfinder General) by Cathedral. After hearing this band's first few albums I could not wait to get to the rest, but this EP really let me down. The band goes from it's doom/heavy sound to more of a psychedelic/rock overhaul. Not one song stood out to me in any way.
Dis-honorable mention: Folkearth - Father of Victory. Disliked the band considerably, will probably never listen to them again. May not be a bad albums, but it is a bad band to me.

By The Klepto at 7:04 PM No comments:
Email ThisBlogThis!Share to TwitterShare to FacebookShare to Pinterest
Tags: *Albums Listened To
Newer Posts Older Posts Home
Subscribe to: Posts (Atom)