The second part of The Offspring's discography. This half of their career hold my favorite records by the group, and these are the albums I listen to the most. As such I could write a stand-alone article for all of these discs, but I'll try to keep it short and sweet for this purpose. 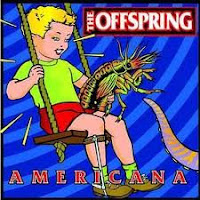 Americana (1998)
Already went into my nostalgic telling of Americana. One of my favorites. 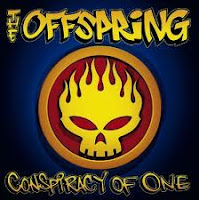 Conspiracy of One (2000)
Not the best Offspring album, Conspiracy of One is an alright release by the group. By this time I was in eighth grade and the pop-punk song "Original Prankster" (the first single) became my new anthem. Something about being a rebel and burning stuff down appealed to me. And even now, after the album has had several plays, looking at the track list I can only really remember that single and "Want You Bad" (one of my favorite Offspring songs) as anything worth listening to. I bet if I had listened to it right before writing this I could pick out a few more good songs, but a true test of a good album and song is its longevity, and for me that only includes the two singles.

Keep on Readin >>
By The Klepto at 7:53 AM No comments:
Email ThisBlogThis!Share to TwitterShare to FacebookShare to Pinterest
Tags: *Retrospective, #Punk Rock, The Offspring

After going through my favorite albums from The Offspring (Americana, Splinter, Rise and Fall, Rage and Grace) and writing a whole breakdown of Americana, I decided to go all in and do a Retrospective for the group.

The Offspring are one of the big three in the Punk Revival scene of the early 90's (along with Green Day and Rancid), and personally my favorite. Americana was the first album I ever bought with my own money (I was in 6th grade), which signified the beginning of my musical independence from my parents (everyone starts as a child with only their parent's music to go with) and led down the winding road to who I am now.
The group's sound has changes over the years, beginning with a down-and-dirty style, semi-hardcore/garage rock if you will, into a melding of grunge and punk in the 90's, then to a more 'poppy' simple sound of the early 2000's. The release of their latest album, Rise and Fall, Rage and Grace, sees the band heading into a 'smarter' venue of music, with musically and lyrically diverse songs and themes, blending in some progressive elements into their punk.
Because I came into the group at Americana, I am a much bigger fan of the second half of the group's career, but I still enjoy the early albums, some of the early singles - though dark and depressing (grunge) - are quite catchy and a good listen. Supposedly the group has another album coming out at the end of this year or into the next. I really want to see in what direction the band heads at this point in their career. 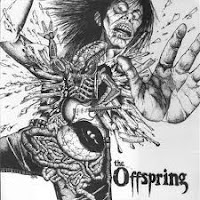 The Offspring (1989)
With lower production values and faster, shorter songs, The Offspring's self-titled debut was more akin to the 'classic' punk of the 80s then what would emerge as a forerunner of the punk rock revival movement. I rarely listen to this album, not being a fan of the style, so I may not be the best person to break it down. Stand-outs "Jennifer Lost the War," "Beheaded," and "Tehran" are all worth a listen, and they show up from time to time in movies or in compilations. Other then that, I really have nothing to say. Awesome album art though, A+ for presentation.

Keep on Readin >>
By The Klepto at 7:29 AM No comments:
Email ThisBlogThis!Share to TwitterShare to FacebookShare to Pinterest
Tags: *Retrospective, #Punk Rock, The Offspring

While the songs "Savannah" is not my favorite sHEAVY song, it is still a good one, and the choices are limited as far as sHEAVY music videos go. It's a live version, but the sound quality is pretty decent, and seems to be semi-professionally done. One thing I didn't like about this video is that you can tell that the singer is forcing his voice to be in the winy-high pitched style that he sings (and live it doesn't come off 100%). I don't know about you, but I always sorta assumes that was just the way his voice was, and they were making the best of it. Not as a gimmick or some stunt. I still love the band, but now I am hesitant to see them live (hell who am I kidding I would totally go!).
Well, that being said, enjoy sHEAVY playing "Savannah" live!

By The Klepto at 4:57 PM No comments:
Email ThisBlogThis!Share to TwitterShare to FacebookShare to Pinterest
Tags: *Video, #Stoner, sHEAVY 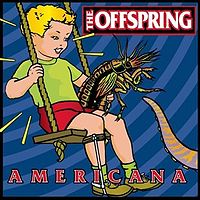 This is it. This is the beginning of it all. The Offspring's Americana was the first album that I ever bought with my own money, being only 12 at the time, it was kind of a big deal. It had blatant use of the words 'fuck,' 'shit,' and 'bitch,' while not new phrases for me, the fact that I could listen to these songs in the presence of my parents was a big deal. Up to this point my musical tastes were dominated by what my parents listened to. Fortunately, most of this was good music, with my dad being a hard rock/metal fan from way back (Manowar, Iron Maiden, Metallica, Deep Purple, etc) and my mother enjoying piano music (Billy Joel and Elton John), British (The Beatles, The Pretenders) and ...well mom stuff (lots of soulful women and poppy tunes). It was from this eclectic upbringing that I evolved, first into punk revival (The Offspring and Green Day) and nu metal (KoRn and Limp Bizkit), then later into power metal and beyond. But it all began with Americana.

Keep on Readin >>
By The Klepto at 3:17 PM 2 comments:
Email ThisBlogThis!Share to TwitterShare to FacebookShare to Pinterest
Tags: *Favorite Albums, #Punk Rock, The Offspring

(I've had this post 90% complete for two months now, never wanting to sit down and finish it up. But after writing the post for Demons And Wizards, I decided to get cracking. So thank Uriah Heep for me ever finishing this article.)
I've had the latest Amplifier album (Insider) for over a year now, and up to now have never given it a listen. But in the past week I was really bored (after my week of roadtrips - 1,200 miles in 5 days) so I let my computer decide for me. I went to my full 50,000+ song library and hit 'random', pledging to listen to whatever popped up. This is the engrossing tale of how I heard/fell in love with Amplifier. Instantly after listening to Insider, I went out and found their first album, and their two EPs and gave them all a listen as well - was not disappointed.

To begin with, their overall sound; Amplifier is an alternative progressive rock band (I know, a mouthful). Their music is not really heavy, and it does seem to move time signatures and styles throughout, and it hosts a mix of spacey and funky sounds. To put it in a nutshell, it sounds like a more progressive Incubus; you know, early Incubus, just a bit more progressive and incorporates a bit of industrial sound (just a smidge). I realize that my description of this group is not beneficial in any way, as it seems to drift, but that is what the music does - drifts from style to style with no course in sight. And it works!

Amplifier (2004)
Their debut album was re-released two times before their second recording, and after listening to it, one can see why. It was originally released on the small/independent label Music For Nations in 2004, before being picked up for a wider release by SPV - with a bonus EP worth of material. I wasn't lucky enough to have this special release, instead finding only the original track version. This album is the groups most 'safe' album. In all of the articles I read about the group, they were called an alternative band, with almost no mention of the progressive elements. This album is probably what the writers were referring to. While there is a hint of the progressive sound, it is mostly alternative rock, with a splash of heavier/metal sounds throughout. It seems like a good place to start, and a good way to get noticed, but I am glad the changes that ended up happening, happened.

Keep on Readin >>
By The Klepto at 4:45 PM No comments:
Email ThisBlogThis!Share to TwitterShare to FacebookShare to Pinterest
Tags: *Retrospective, #Alternative, #Progressive Rock, Amplifier 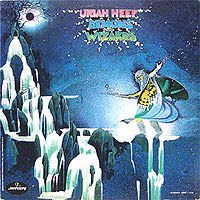 It's been a while, and I have at least two articles that could use my attention, but I just listened to Demons and Wizards by Uriah Heep again and I feel the need to tell you all about this spectacular album. I've already gone into the history of Uriah Heep (way back in January of 2009) so I don't need to go into to much detail on that front. They were/are a British band that is one of the foundations of hard rock and heavy metal music. More specifically, they are the forerunners of progressive rock and - by extension - progressive metal. They were among the first to use dual lead guitars, and layered semi-operatic vocals. Many of their songs were narratives, telling of mystical battles and amazing people; Demons and Wizards was no different.

Keep on Readin >>
By The Klepto at 5:22 PM No comments:
Email ThisBlogThis!Share to TwitterShare to FacebookShare to Pinterest
Tags: *Favorite Albums, #Progressive Rock, #Proto-Metal, Uriah Heep

Albums Listened To In July (58)

I'm reverting back to the old style of it all being in one list, it's easier to keep track of and honestly I was breaking it that way so it was easier to post to The Metal Minute's weekly post of 'Whattya Listenin' to Wednesdays'. But seeing as that is pretty much done with (the author is taking a sporadic hiatus) I am reverting back to the old ways.

I began this month with the hopes of keeping it all mostly brand new music, this lasted about a week and then I started in with the discographies; first was KoЯn, then 3 Doors Down - I think I was doing a whole nostalgia thing (with them both being something I listened to quite a bit in High School). Throw in some new releases by some of my favorite bands (sHEAVY, KoЯn (which is what started the nostalgia trend), and Kiua) and a collection of stoner songs (the various Stonerrock.com compilations) and you have a full month!

Keep on Readin >>
By The Klepto at 6:51 PM No comments:
Email ThisBlogThis!Share to TwitterShare to FacebookShare to Pinterest
Tags: *Albums Listened To
Newer Posts Older Posts Home
Subscribe to: Posts (Atom)