I had some extra time this week (not that I ever have a pressing schedule) so I was album to squeeze in some bands that I really enjoy, but rarely get a chance to listen to. One of these was Holy Martyr, a epic/power metal band I discovered a few years ago, but haven't actually heard in over a year. I've got their two albums, Still At War, and Hellenic Warrior Spirit, released in 2007 and 2008 respectively, so I was able to make an evening of it. And hot damn, I like their version of metal! 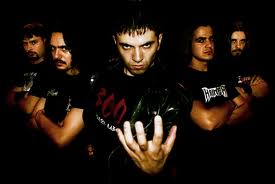 Holy Martyr is an Italian band that sings about Greek stuff, mostly based on Spartan/warrior legend. Their songs are all of war and legend, sacrifice and power, and they all kick some major ass. Think, a more power metal version of The Sword, with some cleaner vocals, and it wouldn't be a bad comparison. They plays a powerful version of heavy metal, their songs are all full of epic sound and remind me of a more melodic Manowar, just relying more on the guitars and drums and less on the vocals. Epic stories, mighty guitar and drum work, and some damn good vocals really propel the albums along. 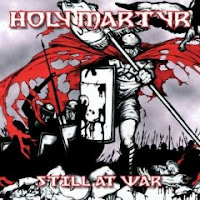 It's all pretty epic, which is why they've picked up the 'epic metal' moniker. I don't like that term, 'epic metal,' it's too vague and really, meaningless. What makes up epic? What genre is epic? While calling a band like Candlemass 'epic doom metal' seems like the same thing, it at least corners them into at least the doom category, which helps a bit in describing their sound. But what defines the difference between epic metal and power metal? Because this is where I believe this group lies within the heavy metal world. While not quite as full-on into the 'power' aspect, it is the best description I have. Candlemass is 'power doom metal' and Holy Martyr is just plain ol' power metal.
That being said, they aren't of the same caliber of 'true' power metallers, like Helloween, Iced Earth, or Manowar, no, Holy Martyr keeps it a bit more grounded, coming off as semi-thrash or as folk metal without the folk. Actually that's the best way to describe their sound, a folk metal band - in scope and lyrical content - who decided to leave the symphony/traditional instruments at home. Their songs are still filled with life and vigor, there are a few songs in a non-English language (they are Italian so I'd expect that, but Metal Archives says it's Greek, but honestly, it could be Dutch for all I know or care), and it melts your fucking face! This is pretty much the same for the good folk metal bands out there; Turisas, Tyr, etc. So that is what I am decreeing Holy Martyr: non-folk folk metal! Spread the word, let the masses know that The Klepto has spoken!

Wow, another article, another rant. Anyway... 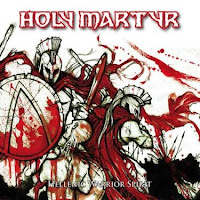 Honestly I don't know how or why they haven't released a new album sense 2008. I know two or three years isn't too long of a wait between albums, but as their debut and sophomore albums were only a year apart, I sort of expected a third somewhat quicker. Hell, maybe they have a third, but no one has updated the Metal Archives as to it's presence, and that is what I'm going off of. Only time will tell.

If you like power metal, or want some melodic thrash (very melodic) give holy Martyr a try. Their layered instruments, and an overwhelmingly powerful sound is what made them initially stand out to me, and I am happy I ever stumbled upon them. While I don't listen to them as much as I'd like, they are still there for me, waiting for me to have a shitty day, waiting for me to remember they exist. For when I do... the roof shakes and the ceiling quakes... and other cliche comments. Whatever, Holy Martyr rocks.
By The Klepto at 12:00 PM
Email ThisBlogThis!Share to TwitterShare to FacebookShare to Pinterest
Tags: *Bands I Love, #Power Metal, #Thrash, Holy Martyr