In The Beginning: Iron Butterfly - In-A-Gadda-Da-Vida

Another new segment, this one dedicated to where it all began; the beginnings of heavy metal itself. Just a short ditty on bands and albums that predated or laid the foundations for the future of music as we know it today! 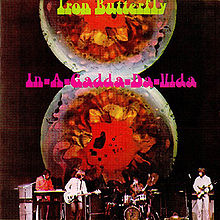 Iron Butterfly is a band that few have ever heard of or even remember today. The majority of those who do remember them, probably only remember them for their tripped-out psychedelic seventeen minute venture titled "In-A-Gadda-Da-Vida," which really was their claim to fame. Hell even me, with my immense collection have only ever heard the album of which this title track is found on. But this a band that we need to take notice of. For a full year before Led Zeppelin released their debut - they being often erroneously titled as metal's originators - Iron Butterfly had released two records, solid in down-tuned guitars, and heavy with the drums (including the massive drum solo within "In-A-Gadda-Da-Vida" itself). Now, I'm not going to call Iron Butterfly as the origin of heavy metal as we know it, but they need to be looked at as a solid influence at the quickly evolving sound.

Besides the title track, In-A-Gadda-Da-Vida is a pretty decent album, especially looking at the age of the record. It was record and released in June of 1968, an era controlled by hippies and Brit-pop, and somehow became a major release for the band. The songs "Most Anything You Want," "My Mirage" and "Termination" are all solid representations of proto-metal, good as anything Deep Purple ever let out in the same era. Track three, "Flowers and Beads," is a little more on the hippie/flower power side of things, again just a sign of the times, as every band wants to have that popular song on the radio (especially then, before the advent of the internet). I'm sure they never planned on having "In-A-Gadda-Da-Vida," the song, be the monstrous hit it was, but sometimes these things happen. 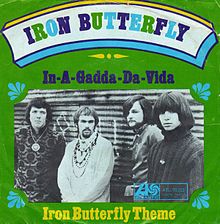 Now then, the song "In-A-Gadda-Da-Vida" was originally titled "In The Garden of Eden" but music folk-lore tells us that one of the members was so stoned (I'm assuming the singer/songwriter, Doug Ingle) that they mumbled a flubbed version of the lyrics, thus leading to the evolution of the title. The song itself is a seventeen minute minute affair, with a 'usual' beginning and ending, full with chorus and vocals, but then after a couple of minutes, and leading into the last minute and a half, it becomes a tranced-out, psychedelic jam, complete with extended guitar, bass, organ and drum solos. I mean these things are legendary, you can't find a list of 'Great Drum Solos' that does not include "In-A-Gadda-Da-Vida" in some form. While not overly complex (I'm a shitty drummer but I can still bang it out), it begins an era of sonic excess that came to fruition in the 70s but continues to even this day.

Regardless your view on heavy metal, or your understanding of the history of music, you can't deny the influence early bands like Iron Butterfly had on it all. Most notably heavy metal, but you can't deny that a strong single didn't make the rest of the world look over and recognize the beginning of a trend. Hell In-A-Gadda-Da-Vida was Atlantic Records' number one seller ever until the release of Led Zeppelin IV, three years later. These are numbers that the rest of the industry could not deny. Following this and the success of other proto-metal bands like Black Sabbath, Deep Purple and Led Zeppelin, the way was paved for the new and experimental bands to come about. And it all was helped along by Iron Butterfly and "In-A-Gadda-Da-Vida."
By The Klepto at 4:02 PM
Email ThisBlogThis!Share to TwitterShare to FacebookShare to Pinterest
Tags: *In The Beginning, #Proto-Metal, Iron Butterfly