If you count all of the studio albums, soundtracks, live albums and posthumous releases, Frank Zappa, and his affiliated projects, has over one hundred albums to his name. That is one of the most proficient composers/writers/musicians I have ever heard of. It's going to take me weeks to even make a dent in his impressive catalog - and I only have forty-seven of them! I kept my collection to only the albums that were released during his lifetime, and only a handful of live albums (mostly his 'You Can't Do That On Stage Anymore' series). Just because of the sheer number of albums, I'm not going to be writing a large amount on each, just a couple of lines, and also for this one I'm going to give each album a rating (something I normally don't do), which will be based on the listenability, when compared to his other works (some of his stuff is waaaay out there). If you haven't ever heard any of Zappa's stuff, use this as a loose guide on where to begin. 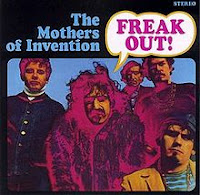 Freak Out! - 1966 (4/5)
The first album, and really quite a good start. It's a bit split on song quality, with some being some great compositions of verse and music, with others being a progressive oddity. Unlike the following few albums (and mostly until we get into the solo years of Frank Zappa) Freak Out! actually was almost entirely made up of what could be called 'songs.' While some were winners and some were losers, they were songs nonetheless. I enjoyed it overall, finding it a great launching point for a long career. 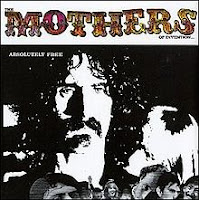 Absolutely Free - 1967 (2/5)
I expected more like Freak Out! and was greatly disappointed. Most of the clever song writing/playing is gone, leaving several avant-garde pieces of jumbled sounds. Absolutely Free had some decent songs within it's covers, and some tracks that made me laugh. There was a repeating bit which was just Zappa's voice in a microphone, telling some rant or something. I laughed because I could see (and he made comment to the fact) that while they were recording, and everyone was talking amongst themselves, Zappa had the microphone and was muttering into it. At the time I'm sure no one knew what he was doing or saying, but when they went back to edit it all they heard his ramblings. I would have liked to be in the studio for that discovery. Besides the one or two songs, and the bits of interesting thrown in occasionally, I would not call this a decent sophomore release. 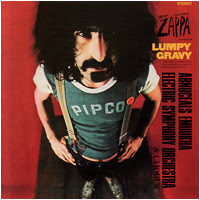 Lumpy Gravy - 1967 (2/5)
His first album labeled just as Frank Zappa, Lumpy Gravy combines the avant-garde of Absolutely Free (and the upcoming We're Only In It For The Money) with a more orchestral-theme. It's him spreading his composers wings, and while it's not a great flourish of skill, you have to start somewhere right? The album as a whole, comes of more as a soundtrack, with a few tracks that seem to have no real purpose or point, but others that are evolved enough to go the full distance (even if these aren't great themselves). Frank Zappa would build on the orchestral compositions with his next fully solo album, Hot Rats, go check that one out if you're interested in the man's beginnings, this debut doesn't do him justice. 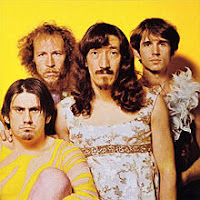 We're Only In It For The Money - 1968 (1/5)
I don't know what they were going for here, but if it was music, they missed the mark. A spoof of sorts to The Beatles' Sgt. Pepper's Lonely Hearts Club Band, We're Only In It For The Money barely contains three tracks that I would call a 'song.' The majority is a garbled mess, some tracks have a semblance of a melody while most quit on that from the get-go. I couldn't wait for this album to finish, and kept hoping there would be some sort of 'recovery song' at the end to make it all relevant... there wasn't. If they wanted to be experimental and controversial then it was a rousing success, but if they wanted an actual music album (I don't think they did) then they failed. Horribly. 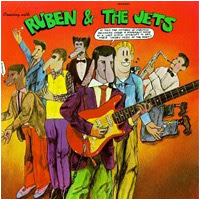 Cruising With Ruben & The Jets - 1968 (3/5)
A spoof/tribute/homage to the do-wop groups of the previous decade, I can't tell if I like Cruising With Ruben & The Jets. I really haven't listened to a complete do-wop album before, so I have nothing to compare it to, and while it's all music (in comparison to We're Only In It For The Money) it's just not what I'd normally listen to. As well as that, I can't imagine being a fan of Frank Zappa during this era, going from some semi-straight forward full band rock, then to complete avant-garde and then to this... It's astounding really. 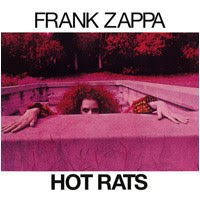 Hot Rats - 1969 (4/5)
One of his more orchestral pieces, Hot Rats does not have a lot in the way of lyrics but that does not take away from the enjoyment of the album. The only song I can recall with anything like lyrics or a story was "Willie The Pimp" - to which they were joined by Captain Beefheart in the studio - and that was one of the weaker songs of the album. Good for people who just want to hear some big band music, and some great music at that! 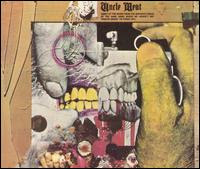 Uncle Meat - 1969 (1/5)
Supposed to be a soundtrack for a movie that was never made (it even says so on the cover in the fine print), Uncle Meat is out there, even for Mothers of Invention music. I'm guessing/hoping that this would make more sense with a movie attached, because this one is weird. Another one with very few tracks I would call 'songs,' but it doesn't come off as avant-garde as some of the others either. It's a mix of quick little full band numbers, spoken tracks about nothing really, and scattered introductions of members of the band and an accompanying song as to their skill. I can't imagine ever listening to this one again, and it continues my questions of who would buy this? and who would produce/release this? Weird does not do it justice.
By The Klepto at 12:00 PM
Email ThisBlogThis!Share to TwitterShare to FacebookShare to Pinterest
Tags: *Retrospective, #Avant-Garde, #Experimental, #Progressive Rock, Frank Zappa