Bands I Should Like, But Don't: Queens of The Stoneage & Co.

I was at work today, and I began to think of acts that by all accounts I should like, but for some reason I don't. Some, while I love the genre in general, their particular representation of it doesn't, or I like all of the previous works by one of the members of the band, but can't quite grasp the new direction they're headed in. And so, because without much thought I was reminded of two such bands - and I'm sure if I put more effort into it I could think of more - I decided to create a new segment dedicated to this notion.

After my 'All In The Family' based on the members of Kyuss, I thought it prudent to continue with the subject and focus my debut 'Bands I Should Like, But Don't' on one of the best-known of the off-shoots of the legendary stoner rockers: Queens of The Stoneage, and the following off-shoots, Them Crooked Vultures and Eagles of Death Metal, basically anything that Josh Homme has his hands in. 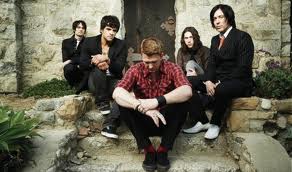 I'm a big fan of stoner rock/metal, as anyone who spent any time reading The Guide could confirm, varying across the numerous sub-genres of this sub-genre. From blues to southern, psych to sludge, I think that every one of these stoner off-shoots bring something to the table, something that needs to be paid attention to. What I don't like is the stoner that moves into the pop direction (I'm not sure is stoner-pop is another sub-genre, but I'm going to use it as such). Bands that combine radio-friendly poppy-sounding rock, with the fuzz and attitude of stoner.It's not a mix that I like very much, and I lament the bands that make this stylistic progression.

Queens of The Stoneage is such a band, melding the heavy fuzz rock/metal of Kyuss with the pop orientation of bands that dominate the 90s alt-rock radio stations. I suppose calling them alternative-stoner is an apt title, it sums them up fairly well, and like everything tagged 'alternative,' it really doesn't mean anything. The only thing you could possibly get from that is it's not the stoner fans know and love, which again, is a decent description.
Honestly I have not spent much time with the Queens of The Stoneage, even before I knew what stoner roack/metal was (circa 2007) I didn't like them. Their big song on the airwaves "Feel Good Hit of The Summer," and whatever else it is they have put out, just didn't do it for me. And you have to remember, I was fourteen when they hit their popularity stride, which means I had none of the good taste for music that I have now, and I still didn't like their drivel.

Sense my musical revolution within college (beginning in 2005) I have gone back and given them another couple of tries, but I can never make it through their first album or two. I remember a couple of years ago trying to do it, but failing, and I remember I tried again in the beginning of 2010, but quit after struggling through their first record. Before I began this article, I was thinking about trying to give them another try, originally thinking it's been a long time, but now I remember that it was recently, too recent to try again.

Moving now from Queens of The Stoneage, I want to touch on the other two offshoots that have Josh Homme at the helm; Them Crooked Vultures and Eagles of Death Metal. I was thinking about writing another article dedicated to these two acts, but honestly, it would be pretty much the same rants as above, just with a different subject matter. So I'm killing two birds with one stone.

With Them Crooked Vultures, I would actually like to give another chance. They came out last year, and I was a bit excited, all the press was great and the blogosphere was abuzz, but when it actually came to the music, I found it really dull. But it's been a couple of years, and they did just win a Grammy (like that really means anything) so it might be time to swallow my pride and give these guys another listen. I know they aren't as stoner-themed as Queens of The Stoneage, but they do have similar roots; not just Josh Homme but also Dave Grohl, whose other band (post-Nirvana), the Foo Fighters, have that bit of fuzz - but not enough for me to go off on a tangent about that. Also, as I'm just learning now (doing some research) their other member is John Paul Jones, who you may remember from LED FUCKING ZEPPELIN!!! Ok, this was a surprise, mostly because its amazing how far legends can fall. But, yet again, this gives me the need to hear their debut album again, if only to ascertain what drugs John Paul Jones is on to be associated with this act.

Ok now, the next act to fall under my wrath, Eagles of Death Metal. First off, I have to say, great name. I laugh a bit every time at trying to create a band blending the extremes of Death Metal and the acoustics of Eagles together, a real beard scratchier. But other then that little ditty, this band has nothing for me. I can't even bring myself to finish a full album. It's pop and garage rock, which doesn't seem like a real blend to me. I've never truly liked garage rock (a couple of decent acts, but that's the same with any genre), and merging in alternative and pop into the mix is just a concoction of suck. I know very little about this band's actual style and I really don't care. I have no intention of ever hearing their music again, and believe the world would be better without it. I call for an old fashioned book burning... only this time with CDs. Who's in!

Alright I've said my piece, and now I feel better and can move on. To sum up, Queens of The Stoneage are too alternative pop for me, not enough stoner rock. I can handle a couple of songs when they pop up on my friends' mix in their car, but any more then that and I'm gouging my eyes out with a rusty spoon (which I keep on me at all times in case of the eye-gouging need). I'm on the fence for Them Crooked Vultures, who I think warrant one more listen before I throw down the gavel on their career. I'm in no rush to do so, but it needs to be done. And finally, Eagles of Death Metal can go fuck themselves, I don't care. Shitty, shitty, shitty.
By The Klepto at 12:00 PM
Email ThisBlogThis!Share to TwitterShare to FacebookShare to Pinterest
Tags: *Bands I Should Like But Don't, #Alternative, #Hard Rock, #Stoner, Josh Homme, Queens of The Stoneage, The Eagles of Death Metal, Them Crooked Vultures

Honestly... I used to feel you on the QOTSA hate... Then, I discovered Kyuss, Mondo Generator etc... and smoked a TON of weed and just put the Queens discography on my ipod and let it shuffle for a few days... became a huge fan... maybe, before you give TCV another spin, get really baked, and try to give it an open minded listen...

It's not really a QotSA hate, as much as a 'eh' or general dislike. If their music comes on I don't automatically switch it, but I don't go out of my way to hear their music.
I still need to give Them Cooked Vulture another try but forget EoDM, I couldn't care less