Bands I Love: The Decemberists

Well, after listening to The Hazards of Love twice last week, and ranting about how amazing that album was, I've been continuing with the theme and have been going through the entire discography of The Decemberists. My initial goal was to write a Retrospective of the group, but those are very time consuming, and I really don't know the band well enough to make the usual observations about their playing style over their career. Sure I know a couple of albums well, and an additional handful of songs, but I would be struggling though it all - with indie folk not being my strong suite. So, I'm keeping it simple, just sticking with a 'Bands I Love', because truly, I love this band. 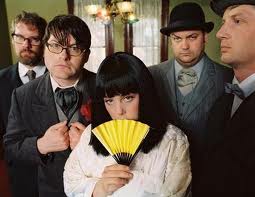 I am a fan of folk, whether it be metal, rock or traditional, something about these songs - often born from woe and doom - speaks to me. The simple instrumentation (for the most part) and the emphasis on vocals and story is what drives the genre, and it's what make's it memorable. But, even with this history, I view The Decemberists as doing something special, something different. They are an American band, from the North West coast, but bring in heavy influences of British folk. This bending of ideals is what draws the group to me - myself being born of both of these worlds (half British and half American).

As well as this, I think the lead singer and songwriter, Colin Meloy, puts a particular spin on the ancient genre. Besides having an awesome name (Colin (with one 'L') is a favorite of mine), the man has an amazing voice. It's thick and immersive, like water flowing over you, forcing you to ride the current in whatever direction he deems. The man's lyrics are something to behold as well, most songs have strong narrative, some story that makes you think, but even the songs that don't have this compelling notion still are filled with historical references and witty banter that makes me chuckle. 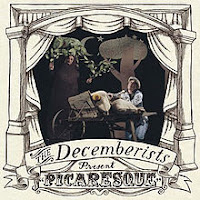 Besides the entire The Hazards of Love album, which I've gone on about before, a stand-out song to this narrative is "The Mariner's Revenge Song," found off their Picaresque album. This is a woeful tale of a young man's lust for revenge, driving him to the sea, with the final battle within the belly of a giant whale. The song is long, almost nine minutes, and houses a couple of musical breaks, and it really sets the scene. With Meloy's diction, I could easily imagine a 17th century English hovel town, a privateer's ship, and the insides of the whale with vivid detail. This is my favorite track by the group, and the one you'd be most likely to show your friends, lord knows I have.

All of their albums tread the line between indie and dedicated folk, with some songs coming off a bit far on each side. While the aforementioned "The Mariner's Revenge Song" is heavy on the folk, "Sixteen Military Wives," from the same album, is very poppy. Still a great song, but a notable difference between the tracks. From the following album, The Crane Wife, there are the triad of title songs (three parts over two songs), which are a mix of progressive and folk (something that would come to a head with The Hazards of Love, their next release), but the song "The Perfect Crime #2" reminded me more of a disco/80s beat song with acoustic guitars. It is an odd song, especially surrounded by the rest of the album, really standing out, but not necessarily in a good way. 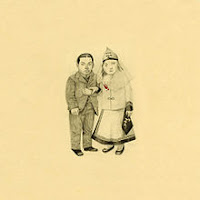 I am more familiar with their later works, Picaresque, The Crane Wife and especially The Hazards of Love (still working on their latest, The King Is Dead), while their earlier works haven't hit me as hard. I'm trying to amend this folly, as I mentioned, listening to their entire discography. Regardless, The Decemberists is a great band, with enough dark and heavy tunes for any fan of rock or metal to enjoy, and enough light bits for the other half too. The only people who I think wouldn't get it are people who only listen to country (even though they do have a couple of country covers from within their EPs) and rap/hip-hop, which honestly, you shouldn't be reading my website to begin with.

That's all I've got. Now you can see why I think Andrew Clayton could do a much better album-by-album review, stemming from the fact that he's already done one for The King Is Dead. Folk is more his mainstay and he could do a much better representation of a Retrospective then I. We'll see if I can talk him into it.
By The Klepto at 12:00 PM
Email ThisBlogThis!Share to TwitterShare to FacebookShare to Pinterest
Tags: *Bands I Love, #Folk Rock, The Decemberists