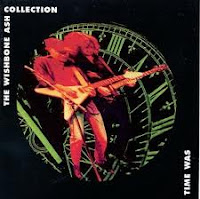 Here's one for you older folks out there, a band that people of my generation have probably never heard of, and I'm willing to bet even a fair chunk of the older crowd never had a chance to listen to this great band. This band was one of the earliest pioneers of dual guitar players, utilizing both as lead and creating an interesting harmony within the melody. Along with this, they incorporated multiple vocalists (three at their beginning) which gave them the flexibility of range, style and layered performances. Using these elements the act combined progressive themes with those of blues rock to create a unique sound. The band I'm referring to of course is Wishbone Ash.


Mixing the emerging themes of blues rock and progressive rock, along with the forming heavy metal scene, Wishbone Ash's songs are all over the place stylistically. I know Time Was is the best of the band, so it may be a little unfair to compare the styles of songs next to each other, seeing as they were pulled from over a twenty year career (at the time of the album's release, 1993), but I'm not complaining about the styles, just remarking that they are there. There is the constant melding of hard/blues rock and progressive rock, sounding at times like a mix between Led Zeppelin and The Allman Brothers Band, but it goes deeper then that. At times I hear tunes of the psychedelic-induced Yes, at other points I hear a vocal harmonized/operatic style closer to Uriah Heep then anything else. Early in the collection, there is a 'call and answer' section (I believe it's the song "Errors Of My Way" but I'm not wholly sure) between the lead guitar and the vocals, wherein the guitar plays a line/lick which the vocals attempt to mirror. I've heard this before in other acts, but in this example it's actually quite a long section, taking up a good chunk of the song. It's something the members spent some time on, not just a four-bar phrase tossed in for fancy.
As far as Time Was/The Wishbone Ash Collection is actually concerned, I have to say I like the second of the two discs the most. The songs off of it are way more 'classic rock' sounding then the first half. The first disc has the longest songs of the release on it, each coming in a little over ten minutes, and while the third one, a live version of "The Pilgrim," the other two, "Phoenix" and "Handy," both get a little dull - too much in the psychedelic and not enough in the rock. There are a few more so-so songs, but they are mostly contained in the first half the double album. Actually, "The Pilgrim" is where the release begins to truly take off, with just hit after hit following. They all aren't winners, but a much more focused group of releases are heard.


Listening to their best of, even if it's almost twenty years old itself at this point, makes me want to hear the actual albums that Wishbone Ash put together. Well at least their first four, this collection of songs is focused on their first few albums, before band members splitting and stylistic changes, with only a handful of the tracks from these later ages. Nothing against the non-original members, but the legendary power-guitar duo of Andy Powell and Ted Turner can't be replaced that easily. I'm sure they had some good music post-Turner (he left the act in 1974), I want to hear the best the act has to offer. With a career spanning over forty years, with twenty-two accompanying albums, you kind of want to pick and choose. Their first four albums, Wishbone Ash (1970), Pilgrimage (1971), Argus (1972), and Wishbone Four (1973), are the ones to be after (well apparently Wishbone Four was a great stylistic change for the group, so that one may need to be approached tentatively). So go out, try something new, a classic hidden gem, lost in the masses of bands and artists out there. If you're into the bluesy classic rock feel, with a bit of prog mixed in then Wishbone Ash would be right up your alley.

I have their s/t debut, Argus, Wishbone Four, There's The Rub and Front Page News.

The S/T and Argus are wonderful albums, great rock tunes, the first one being quite progressive even, particularly the last two epic songs. Argus is just wonderful from beginning to end with a mixed variety of songs, some more blues based, the others more rocking. Those two are really spectacular. The others I have are decent to good albums and I don't regret having them.

I also used to have Twin Barrels Burning and Raw To The Bone which I found bad and sold them.

I've yet to get Pilgrimage but I will.

Yea they sound good. If I can make some time I'll try to get to their first four releases.