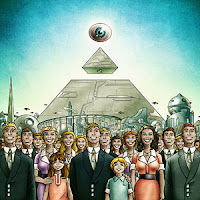 With a name like Ironweed, I'm always surprised with how much energy this act puts out. As I said last week, the band's style melds stoner and alternative metal - something they do quite well - but from my experience with bands that have 'weed,' 'pot,' 'dope,' 'bud,' etc within their name, they are usually more stoner and less metal (except for the sludge acts). This is what history has shown me, and this is why I am never expecting the intensity that Ironweed throws out there with every riff. This was true with their debut, Indian Ladder, and it is true now, with Your World of Tomorrow.

I've been hearing some grumbling across the interwebs about this album, about it not being a fulfilling sophomore release and other such squawking. I can't see how this could possibly be a concern or worry, because if Your World of Tomorrow is anything, it's consistent with Indian Ladder. The punchy guitars are still a focal point, this time with added solos over it all, the vocals are still stoner/thrash style (shouted but understandable), the drums still pound away. I don't see a huge difference here.

If anything Your World of Tomorrow if a little more varied is musical style, and goes a little deeper in each direction. It's not as fuzz-oriented as Indian Ladder, also adding in some tracks that are light on the guitar, heavy on the bass and using the vocals as the focal point. It's different, but not bad by any means. Besides this small shift, pretty much everything I said before is maintained here; it's stoner mixed with alternative metal, bringing a raw fury to a genre usually known for its laid-back style. I suppose they bring in sludge elements, without going into the extremes that usually goes with sludge. But that's ok, this is how I like it.

As I said above, I don't get the complaints about Your World of Tomorrow being worse then Indian Ladder, there are some stylistic changes, shifts in focus, etc, but most acts change sounds between albums, it's called the evolution of sound. If an act stays too similar for too long they are ripped apart too. The trick is to maintain a resemblance to their original sound while experimenting with the new style. It's all about balance and I think that is something that Ironweed has excelled at greatly. Don't listen to all the nay-sayers, listen to me, your friendly old Klepto. I'm trustworthy...
By The Klepto at 12:00 PM
Email ThisBlogThis!Share to TwitterShare to FacebookShare to Pinterest
Tags: *New Album, #Alternative Metal, #Stoner, Ironweed

Awesome review, man! I can't wait to hear this album!!

It was good, and as I said, I'm always surprised with how rocking a band with the name 'Ironweed' actually is