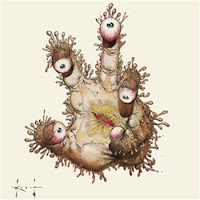 With a vocal style reminiscent of Serj Tankian (of System of A Down if I have to make the distinction for anyone), Giant Squid plays a style of new progressive metal. melding the prog with jazz and atmospheric elements, bringing it just a hair's width short of post-metal. There are sounds of strings (cello I believe), keyboards, and other unique sounds - sometimes just a droning melodic melody - that really bring it into a totally different vibe.

I'm not going to lie, the only thing that initially attracted me to this band is the album artwork to The Ichthyologist. Look at it (to the right), that is some awesome shit, and I've said so before. There is another version of the album artwork floating out there (see below), which makes me wonder which is the original, but honestly I don't care, this one is perfect for me.

My enjoyment of this album is varied, as they are all enjoyable tracks, but some are so amazingly good that the 'only enjoyable' ones fall way, way behind. The second track, "La Brea Tar Pits," starts off slow, but ends up churning into this doom, sludgy sound, just chugging along endlessly - a great idea for a song that claims the title of a tar pit famous for trapping prehistoric animals (and people). Track four, "Dead Man Slough," is another doomy one, that begins as nothing special, but the end of the song builds into this wall of sound, with so much energy and emotion coming out of my speakers it's amazing. "Throwing a Donner Party at Sea" follows immediately, except as nothing like the previous tracks, this song is fast, loud and has in-your-face style of sea shanty ditty (reminds me of some of the folk punk bands I like). The vocals are a little rough, coming in almost post-hardcore, but they really work with the quick style of the song. It incorporates horns (trumpets I believe) and strings (back to the cello) towards the end, which almost acts like an outro until the vocals come in again, with all the angst of the previous verses. All of this is supplemented by the amazing finale of the album, "Rubicon Wall," which seems to try and combine all of the sounds and styles of the previous tracks into one intoxicating song. 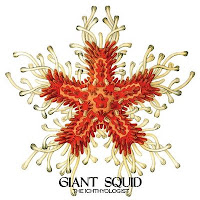 Before listening to The Ichthyologist again, I partook in the group's debut, Metridium Fields, to get a base of their style, not that it really helped because the albums are very different. Metridium Fields is much more straight-forward (at least until the list, twenty minute song), following a more regular song progression and style. The Ichthyologist has songs falling mostly between two styles; doom/atmospheric and melodic/jazzy, but is missing some of the more usual musical aspects heard on their debut. I would call The Ichthyologist much a more post-metal style then Metridium Fields, which is more strongly progressive overall. Hell, there is even a drastic difference between the vocal styles of the two.

Giant Squid's The Ichthyologist is an album I strongly enjoy, although it isn't a full album of hits, the quality of the individual songs (and their varying styles) carry the album well. Supposedly, they have a new EP due out later this year, called Cenotes, and so I look forward to that. For the time being, I will continue to enjoy the two discs they have blessed us with, as should you.
By The Klepto at 12:00 PM
Email ThisBlogThis!Share to TwitterShare to FacebookShare to Pinterest
Tags: *Weekly Dose of Prog, #Post-Metal, #Progressive Metal, Giant Squid

Brilliant album, love it and the one before it, while being different in style. I got Metridium Field from The End Records/The Omega Order when the first Grayceon album came out (they were offered as a bundle - perhaps because of Jackie?).

I also enjoy here their revised version of Throwing a Donner Party at Sea which you can hear, in its earlier form, in their Monster In The Creek release (again, a different style, but an entertaining EP of early material).

The first cover art you show was for their self-released version. Once they got signed, it was reissued with the newer art work.

Good looking out. I really like the original artwork, I would never have switched it.
I saw that Giant Squid and Grayceon had a split together, so that may be why they sent both albums out together?

Was just checking their facebook to see if anything new is happening, but there are only show announcements, no new material planned.

Oh, I missed that part. Looking forward to it then!