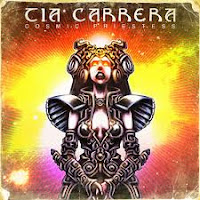 When I got the Small Stone care package (the recording company's full 2011 line-up albums) I was a bit confused to see Tia Carrera included with the group. A quick google search led me to believe (for a short while) that she was the chick from Wayne's World - the actress' name is Tia Carrere so it's close. It turns out that she has a band that she fronts, when she's not making the one movie a decade. I was initially confused because I couldn't imagine her playing anything that would constitute a stay on the stoner label of Small Stone. A little more digging got me to the right act, and I have to say I'm happy that it turned out this way, as Tia Carrera (the band) kicks some stoney ass!

Cosmic Priestess is one doomy-instrumental-stoner-extravaganza. It sounds half carefully planned and half made up on the spot; part jam, part craft, all rock. The album opens and closes with the simplest and shortest songs - not a shortcoming as both are over seven minutes in length - very astutely bookending the LP with a similar style. The first song, "Slave Cylinder," is a build-up track, never quite reaching it's full potential, but accurately setting the stage for the later works. The last track of the album, "A Wolf in Wolf's Clothing," is a very groovy and semi-funky song, first focusing solely on the the groove, but eventually shifting the focus to a more drum and guitar back-and-forth. It's a great outro, and puts a memorable ending spin on Tia Carrera's latest release.

The middle tracks are the ones worth mentioning; the second track, "Sand, Stone and Pearl," comes in at fifteen minutes but doesn't feel so long (a great boon with instrumental music). It has some great growth throughout most of the song; the beginning starting simple then adding layers and style as the song ages. It does tend to drag a bit at around the ten minute mark. It's as if the music is trying to get over a hill, but never can quite reach the top. But after the initial hiccup, the ending of the song pulls together to give it a killer finish.

The real focus of the album is the penultimate song, "Saturn Missile Battery." This is a thirty-three minute hulk of a song that seems to already start in the middle of it all, with the rocking track faded in as opposed to an actual hard start. Not something you see everyday, I'll give them that. Tia Carrera keeps this hard rock fuzz style up for quite a while, by the ten minute mark, the song has begun to show signs of slowing, with less jacked guitar solos and whatnot, but the there still are solos, and the drums are still pounding - every now and then playing a fill at the end of every bar, another neat touch - still keeping the energy alive. At around the fifteen minute mark there is a slight shift in style and/or key, the energy is returned and so have the intricacies heard before. It seems like the musicians have taken another breath and then bellowed out a little bit extra for the fans. The song begins to hit another slowdown/simpler version (although still with complicated drums) around twenty three minutes in; the guitars begin to fade in and out, sounding spacy, all the while the bass and drums are playing a fairly complex (at least sounding) paired rhythm that goes real nicely with the guitar's wailing. This eventually (over a few minutes) continues to die down, with the bass and drums mellowing a bit, turning into a psychedelic trance-fest then anything else. There is still the occasional phrase where the drums come in hot and heavy, but for the most part the psych has us, to wrap up the song. Jesus, what a song!

I find it fitting that Tia Carrera is an semi-progressive stoner jam band, as the original artist of mention for this article was to be Wishbone Ash, but I figured they were progressive enough for this week's 'Weekly Dose of Prog,' so look out for that one on Friday. A little teaser, for those who don't know, Wishbone Ash is a classic rock band who melds progressive elements into their epically long songs, melding that, rock, blues, and metal into some pretty amazing stuff. Definitely something to check out if you're into The Allman Brothers Band or Led Zeppelin. Anyway, more on that later.

Cosmic Priestess if Tia Carrera's fourth album, second on Small Stone, and first the The Klepto. Their brand of jam instrumental stoner flows really well from beginning to end. The album doesn't fall onto the hard times of some instrumental acts, even with a over-thirty minute song! I'd really like to hear their earlier work, and may have to do some hunting to track it all down. I think the time would be worth the investment.
By The Klepto at 12:00 PM
Email ThisBlogThis!Share to TwitterShare to FacebookShare to Pinterest
Tags: *New Band, #Instrumental, #Psychedelic, #Stoner, Tia Carrera