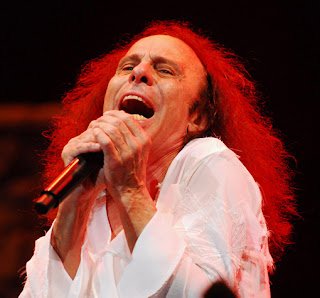 Today's post was supposed to be an exclusive interview with Sabaton, by the overly talented Gryphyn, and I was also working on a review for the new Red Fang album but it all is getting pushed back a day (sorry Gryphyn) so I can bring memory back to one of the mad men of metal: Ronnie James Dio, who died of stomach cancer one year ago today.

It's weird because although I am only in my twenties, thinking of Dio's passing still brings me sadness. I mean, a couple of months previous Peter Steele of Type O Negative died, and he had a much more 'actual' impact on my life, having bought ToN albums and seen them live. But although I lament his death, it is still not anywhere close to what I feel about Dio. In my delusions of grandeur I always hoped I would bump into Dio at the store or at work or something, and that with my stupidly-large knowledge of heavy metal, I could smooth talk my way onto his next tour or something. I know it's foolish but it's my dream ok? I find myself having this same daydream at work now sometimes, before I remember that he has died and that it's a 100% impossibility (as opposed to the 99.9% as it was before). Makes me feel even shittier at my shitty job.

I grew up listening to Holy Diver, another album I can thank my dad for, and when I began to expand my horizons I quickly discovered Ronnie's years at the helm of Black Sabbath. The next step was discovering Rainbow, and that only happened because I had noticed a lot of metal acts covering Rainbow songs or citing the band as a musical reference. It happened so often that I decided to check the group out, which is when I discovered that Dio was the front-man for that act as well! By this point I was in college and was well within the idea that 'Dio is God' (hell it means God in Spanish), and I wanted more. I picked up all his solo efforts, and the few Sabbath albums I was missing, before I looked back to before Rainbow, to what would be my most surprising and probably favorite discovery; Dio's first rock act: Elf. It was totally unlike anything that I had heard the man play before, but there he was, with his booming voice and bard-like singing quality. There was my metal God. Sense then, I still listen to his solo works occasionally, the Black Sabbath years a little less then that, and his final release Heaven & Hell a few times as well. But I listen to Elf all the time, at least one album a month, often the whole discography.

What I find most surprising about Dio's passing is the lack of fanfare today, at the anniversary of this legend's death. Now I'm not saying that there should be a party, but there should be some serious mention and/or thought given to the man's memory. The only website that I've seen so far, with anything more then a passing note has been from That Devil Music, and for that I commend them! They aren't having just an article (like I am, sorry) but an all-day wealth of posts dedicated to the man. Something that I think every site should do on some level. 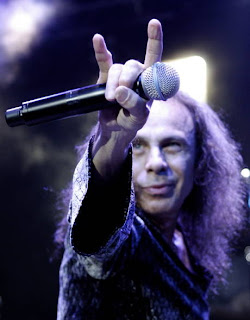 I'm guilty of not making this a whole big affair as any other, I'm writing this article minutes before it gets posted. I don't pay any attention to time or dates or whatnot, so I never would have realized the importance of today if not for TDM pointing it out to me, but at least I'm doing something! When a man like Dimebag Darrell of Pantera gets all-day (in some cases all-week) articles from numerous blogs/websites and the godfather of heavy metal barely gets a passing word... that's a sad day for me.

So go out, think about Ronnie James Dio and all that he has done for your life and others like you. Tell a friend, tell a stranger, tell FaceBook, do something. He deserves so much more then he is getting and it actually angers me that a legend is forgotten so quickly.
By The Klepto at 12:00 PM
Email ThisBlogThis!Share to TwitterShare to FacebookShare to Pinterest
Tags: Dio

Thanks for the kind words, Klepto. I agree a ton of coverage happens for Dimebags death each and every year and he defintely made his mark. I think if his death had been something other then a brutal murder onstage it might not have received as much recognition as it does. Let's face it, Pantera wasn't even active when it happened. But Dio on the otherhand has spanned generations. His music has touched many lives and not just a certain subset of people.

Now admittedly next year we probably won't do all day coverage but save something like this for maybe the milestone anniversaries but it seemed appropriate 1 year after especially since I have new staff members that are also fans since Dio's passing last year.

It's okay, if I had realized it had already been a year I might have written this article myself D: