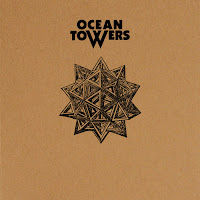 In a very 70s metal way, Ocean Towers puts out tunes. Their debut EP, Chapter 1 (which is available free from their BandCamp page), isn't quite enough of a throwback to be confined to the retro-rock tag, but I could easily see some of these songs appearing on a mid-to-late 70s release. Along with that there are plenty of more modern sounds and elements within the five-track record - it's an adventure with these guys.

The first two tracks, "New Slides" and "Honey Slides," are the obvious retroly-influenced tracks, at times sounding like Black Sabbath (mid-Ozzy era, think Vol. 4 or Sabbath Bloody Sabbath) or heavy Deep Purple, mixing all of this well within the stoner vein of Kyuss. The balance of style and form is what really stands out in my mind with these two, there isn't any wavering of the music or the vocals, nothing that would bely these relative newcomers short histories. This is all rock n' roll and metal, a mix so well stirred you can't see where one begins and another ends.

Unfortunately, the following few songs don't follow suit, instead moving directly into the more modern style of stoner and doom. Track three, "Echo," is just dull when compared with anything else on the album; it's a generic sounding stoner jam, a little bit of groove, a little bit of funk, but nothing to write home about. The next song, "The Stand," does a much better job of this, adding doom into the collection of sounds. This song is good, nice and heavy, with a moving bass-line that takes focus throughout most of the track, but it is of a way different style then the beginning of the disc. When on its own, the song does well, but when the whole disc is considered it falls a bit short. I still like it, and will be rating it highly, it just sounds like a completely different band.

Which brings us to the final song on the Chapter 1, "Lucid Journey." This track pretty much combines everything I've said above into one song. It is the rope that holds the release together. It's heavy in the guitar, drums, bass and the retro, combining classic rock sounding guitar with a fuzz, doomy bass and rocking drums to make one hell of a jam. This time Ocean Towers adds psychedelia to the mix, bringing on a whole new spin to the groups sound. There are no vocals, but I don't think this hinders the song at all, perhaps even helping the ending product. It would suffice to say that "Lucid Journey" may be my favorite of the EP.

Chapter 1 is a good debut, offering a wealth of different sounds and styles for any prospective fans or record companies. A little bit of classic rock, a little bit of doom, a lot of stoner, and a shit-ton of kick ass music. Besides some loose points in the middle, Ocean Towers are on to something with this EP. I'll be checking back in with this lot.
By The Klepto at 12:00 PM
Email ThisBlogThis!Share to TwitterShare to FacebookShare to Pinterest
Tags: *EP Shakedown, #Stoner, ^EP, Ocean Towers