Weekly Dose of Prog: Gojira - The Way of All Flesh 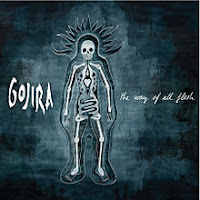 In my ever-constant search for new and exciting music, as well as being open minded and pushing my own boundaries, I took a chance and decided to listen to Gojira. The band is from France and has been making waves for a number of years. Their latest album, The Way of All Flesh, was seemingly loved by all, every time someone reviews it - even now - it's overwhelmingly positive. They combine progressive elements with death screams, thrash and new wave of american heavy metal (which to me is a mix of thrash and death screams, but I won't get into that right now), which is what got my interest. We'll see if I join in with the masses with love for this group and album.

In the past the only thing I ever heard about Gojira was either just snippets from their songs or reviews on other metal sites. Most of the reviews equated them into the death metal bracket of music, which i absolutely abhor, so I had really no interest to actually listen to the band. This changed very recently because within a week's span two websites had pulled up a song and/or video from the act, to which I gave a quick listen, and discovered that I actually enjoyed the music I was hearing. From that point on it was the simple matter of discovering that I already had their critically-acclaimed 2008 album, and then to actually take the time to hear it - not the easiest task let me assure you.

This is only my first listen of Gojira's The Way of All Flesh but I have say that I'm actually enjoying most of it. Not all the tracks are winners, with my personal tastes leaning towards the more progressive and less scream/death oriented. I wouldn't call any track on this album a real death metal song, even the sub-categories of melodic death or (as Wikipedia says) technical death, as nothing ever gets that growly or dark. Instead, I'd stick with the NWOAHM tag, with a little more thrash thrown in then usual. Maybe it's because I don't listen to this end of the metal spectrum as much as the others, and I can't pull out the minute differences that make up the categories (by way of example, I can tell the difference between sub-genres of the stoner category: psych, southern, blues, metal, rock, groove, etc), but to me The Way of All Flesh much more Lamb of God over Cannibal Corpse.

The Way of All Flesh is mainly a combination of thrash/NWOAHM/death, with progressive themes added in for added style. The prog is noticeable, but not so in-your-face as some other bands' style. Most of the songs have varying styles, times, rhythms, and key signatures jarred together to make eclectic and static transitions. It sounds kind of crappy on paper, but believe me that it works pretty damn well. You have no clue with what rhythm will follow a verse, or where the song will lead. It could be a screamed chorus, or into a long breakdown, or something else all together. A lot of the songs don't follow a specific order or theme, where if one time the verse leads to chorus, there is no guarantee that it happen that way again. It's an experiment of both composition and of listening.

An oddity that I thought/discovered is the third track, "A Sight To Behold," reminds me strongly of Korn, at least their Follow The Leader album. I know that is going to earn the ire of some readers, but the verse sections, with the pulsating guitar and staccato (aka very short) vocal pattern does nothing but throw me back to 1998. There were a couple of more times on the album that reminded me of Korn, but nothing so blatantly obvious as the third song.

Another song that hits my memory is the eighth, "The Art of Dying." It begins with the oddest intro, sounding like random clicks that eventually evolve into a really eclectic beat before coming into the main song. The song overall doesn't stand out too much from the rest of the album, but at one point, where the vocals came in after an extended instrumental break, it reminded me very strongly of the ranting style of Peter Steele with Carnivore or early Type O Negative. It was only this one section, of the nine minute song, but it actually made me stop what I was doing to listen to it because it stood out so far from the rest of the song and album.

I'm actually surprised with how much I enjoyed this album. Gojira's brand of death (if you can call it that) mixed with progressive metal is something that I can enjoy without having to cup my ears over the racket. There weren't any song or particular point that I was unable to get through, each song had it's quirks and some level of enjoyment value. Like last week's 'Weekly Dose of Prog' about Awestruck, The Way of All Flesh isn't primarily a progressive metal album, the themes are there - and this time much more obvious then last week's - but the focus seems to me more on the thrash/NWOAHM/death outlook. While nothing on The Way of All Flesh makes me want to rush out to collect the rest of the band's discography, it does open my eyes and ears to an otherwise unheard-of type of music.
By The Klepto at 12:00 PM
Email ThisBlogThis!Share to TwitterShare to FacebookShare to Pinterest
Tags: *Weekly Dose of Prog, #NWOAHM, #Progressive Metal, #Thrash, Gojira