Weekly Dose of Prog: Sherman Burns - The End Is All 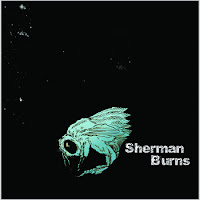 I was having a hard time deciding on an act/album for this week's Weekly Dose of Prog, so much so that I ended up going through the 2011 albums I have playing the first tracks of albums to see what appealed to me. I got to Sherman Burns (rather quickly; there haven't been that many prog releases yet this year) and started with "Bone," and was intrigued. So with The End Is All I went.

This is their first release (available for pay-what-you-want at their BandCamp Page), so other then listing to the first track, I have no idea exactly what to expect, as their is very little press out there about them. I could only find a few articles that even make mention of this band, and then nothing in the way of a true review. so hopefully I am the first! What I end up hearing is a blending of progressive metal, groove/thrash licks, and some hardcore themes for good measure. I suppose that's a little like groove-oriented mathcore, but then again, I'm not a big listener to the genre so I can't truly tell. Regardless, I am enjoying this particular foray into ...whatever genre this is.

One of the elements I like the most within The End Is All is the variance of it all. Their songs contain all sorts of different styles and genres, blocked together to give interesting passages throughout. "Bone" goes straight from acoustic guitar into full on prog, while the next track "Prism" keeps the prog theme but begins to show the -core influences, but not to an annoying degree.

The whole album is in this eclectic fashion, perhaps best described by the quick-half-way song, "Salmon of Capistrano." The song reminds me a bit of early System of A Down, with quick, short passages jarred, seemingly randomly, into others. Immediately following, "Mung Tongue" is the slowest and longest track of the album, spending most of its time reminding me of 90s alt-rock, but then having weird passages which only contain chanting-like vocals. It was a stark contrast to the rest of the song, but it really caught my attention, which in turn made me focus more on the rest of the track. It was odd but strangely enjoyable.

I guess that's the best way to describe Sherman Burns, 'odd but strangely enjoyable,' it sums it up so perfectly. There is some damn good music here, and enough stylistic changes for anyone to find a song or two to enjoy. The End Is All blends together a lot of sub-genres of metal together, but in a really creative way. I love the progressive themes and the groove/thrash elements, I can even enjoy the hard/math/metal-core elements to it (and you all know I normally stay away from such things) because of with what skill it is done with. No one genre is to overpowering/overwhelming, deftly jumping between them, like a little kid playing dodge-ball. If I had known anything about this group's musical style, namely the whole -core thing, I probably would have put off reviewing it for a while, but as fate has it, the album has the best opening track of any of the prog albums I have right now. I'd seriously suggest checking out Sherman Burns, I know I'll be following them a bit more closely from now on.
By The Klepto at 12:00 PM
Email ThisBlogThis!Share to TwitterShare to FacebookShare to Pinterest
Tags: *Weekly Dose of Prog, #Progressive Metal, Sherman Burns