I've been owing Peanut Butter Lovesicle a review for some time now, which is why I'm having this EP posted mid-week instead of for an EP Shakedown, they deserve as much. 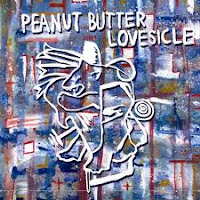 The decent-length EP (about twenty-three minutes), Heavy Daze Wildcat Craze, starts off interestingly; the first track, "Colorblind," begins with a very classic-rock sounding guitar lick, giving a real laid-back feeling. The song quickly shifts into a mini-funk/groove style, with the guitars and bass playing a major role. There are three different styles of vocals, the first a bit growly and guttural (not too much though), the second more laid back - something I'd expect with the music - and a third which sounds like it's being played through a voice recorder. Kind of odd, but also kind of interesting, I'm not sure what to make of it yet.

Track two, "State of I," starts off again with a retro-rock guitar riff, although this time much slower and semi-bluesy, something like Eric Clapton. The guitars still play a major role, but at least this time the vocals are a little more pronounced. Speaking of the vocals, the second style (the laid back and chill version) plays the main focus, much to my enjoyment. It really works well with the music behind it.

With the next, "Sicamore Trees," the album takes a drastic stylistic shift, moving from the blues/retro-rock into the psychedelic rock era of the 60s. The guitars are over-produces, with their sounds blending into each other, the vocals begin very fuzzy and processed, but then shift into a clean four-vocal-round style, repeating a line of lyrics again and again ("What's more green then the Sicamore Trees? That's why kids smell fear"). It sounds like some of The Beatles' more avant-garde works (not too far out there, but something weird nonetheless), or something progressive like Yes. A stark shift that boggles my mind.

"Commodore" sees a return of the stoner/blues style, although with a more modern edge. I don't get the feeling of retro-rock with this one, instead hearing more of a Faith No More sound; rock with a funky edge to it. Pretty straight-forward, catchy bass licks, a neat guitar solo, oh yea, and the drums finally have a part worthwhile! Nice to hear that.

Thus bringing us to the final track of the EP, "Hiroshima," with a name like that - one that holds such a violent history - I kind of expect something hard and heavy, although with Peanut Butter Lovesicle, you can't really predict where they will head. Instead of being something heavy and frantic (as I would have assumed), it's another groovy/jam based song, akin to the first couple of songs. It's another slow, chill song, like "State of I," which I enjoy, but this time bringing the drums into a more important role, sort of like "Commodore," again nice to hear.

Did I say that "Hiroshima" was the last track? Well I was obviously mistaken, because there is a SECRET TRACK!! OoooOoooo... I know, you are surprised, as was I. The song is an acoustic piece with only a guitar and a voice, not of much substance or real rhythm, and it cuts out mid-thought. I don't know what that was supposed to be, but I'm going to pretend it never happened.

Peanut Butter Lovesicle is... well, interesting. I don't know what to make of them really. They have some really good moments and jams; with "State of I" being my favorite, followed closely by "Hiroshima," some interesting influences, and one really trippy track (I think I'm going to listen to it again... yep still blows my mind). Heavy Daze Wildcat Craze is a decent debut, one that shows skill and promise, if only they need to focus a bit more on their particular sound they wish to portray.
By The Klepto at 12:00 PM
Email ThisBlogThis!Share to TwitterShare to FacebookShare to Pinterest
Tags: *Band Submission, #Blues Rock, #Stoner, ^EP, Peanut Butter Lovesicle