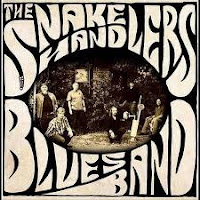 I've been on a bit of a mini-blues and southern rock kick lately, with acts like Confused Little Girl, Black River Bluesman & Bad Mood Hudson, and Bo Molasses. There is just something nice about the laid back and simple sounds of many bands within the genre. It's not real heavy (although it can get there), the vocals are catchy and the rhythms are something you can tap your feet to. Keeping on with this, we move to The Snakehandlers Blues Band, and their album, Rock Plus Roll. I got maybe one hour of sleep last night, so this may not be my best work, but I gotta keep pumping them out, for you, my adoring fans.

The first thing that hit me, when the first track of Rock Plus Roll came up, was a strong feeling of modern-era Clutch. The vocalist has his moments when he sounds just like Neil Fallon, and the band has licks and rhythms that could be off Strange Cousins From The West. Once you get further throughout the record, The Snakehandlers Blues Band sound less and less like Clutch, but the initial thought remains, and remains in the background the whole time.

Besides the underlying Clutch themes, the album is much more southern blues and varied. The vocalist changes styles between tracks (unless there are two vocalists, which is just as varied), and the sounds of the songs change drastically. Just in the first three tracks the songs go from southern stoner (lots of fuzz), to blues stoner (continuously groovy), to straight blues (with mellow piano and harmonica). It's an interesting ride.

I like the varied styles of the group, besides the aforementioned, there are also influences of swing, the simple hair/stadium rock of the 80s and a hinting of big band tunes (heard intermittently). It seems like the album should be a little too eclectic, but it all stays very nicely in the blues/stoner vein, pulling it all together wonderfully.

The Snakehandlers Blues Band, besides having a really awesome name, are a great stoner blues band with southern influences. Their album, Rock Plus Roll, is very enjoyable, switching sub-genres and influences with pretty much every song. Well worth the listen.
By The Klepto at 12:00 PM
Email ThisBlogThis!Share to TwitterShare to FacebookShare to Pinterest
Tags: *New Band, #Blues Rock, #Southern, #Stoner, The Snakehandlers Blues Band