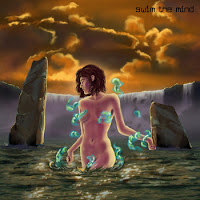 I'm sorry to say that I've been ignoring most of the band submissions I've been getting. I have a stack of CDs and an equal amount of digital discs that I haven't been getting through nearly as quickly as I should. Well no more. Starting this week, I will dedicate at least one day solely to these struggling acts (most with great music) and writing reviews/promotions for them.

Swim The Mind was one of the first bands to actually contact me directly (the others before this was from Heavy Planet and Ripple Music), so it is sad that I've waited this long. But I'm on it now, and I'm here to say: you should really check out Waterfall Walls.


Their BandCamp page (where you can also listen and/or buy the album) has their tags (you know, something to group their sound/style) listed as grunge, alternative, and progressive, with the bands they are most like as Alice In Chains and Soundgarden. Now, I get the genre mix, the band is mostly alternative with stoner mixed in - these mixed often get classified as grunge or post-grunge...whatever that is - with a touch of prog in there for good measure. They aren't really too far into any category to really qualify as anything but stoner, and I like it that way. They have the base genre, but still take the time to venture out in new sonic directions. I disagree a bit with the band equivalents though, and while I do hear some Alice In Chains (it was actually my first thought once the first track came on), they have so much more then that to offer. Consider it a starting point, fans of Alice In Chains would probably find a lot to like on Waterfall Walls, but it's not a necessity. I don't much care for Alice In Chains or Soundgarden, but I still enjoyed Swim The Mind, so make the decision for yourself.

As the album progresses, the styles become more and more combined, with the 90s alt-rock sounds blurring with the progressive themes. While in the beginning, you can hear the different passages and their stylistic origins pretty easily, as early as the forth track, "Regret," this ability starts to fade considerably. An actually nice twist, nothing you'd observe without truly listening to the album, but I think it would flow into your subconscious rather nicely.

Besides going track-by-tack and pointing out every flourish of tune and melody, it's kind of hard to describe more of Waterfall Walls. The alternative/stoner/progressive description is the best I can offer, and even by the end of the album it hold true. The one addition I have to make (took me the whole album before I could figure out what other band's style I kept hearing) is that there are certain passages throughout the whole album that strike me with a strong Tool feeling. They too meld the progressive with the alternative, so the similarities aren't too far off. It's not a huge comparison of sound, but it was nagging at me the whole time I was listening to them.

Swim The Mind (thus far) is a throwback band, back to the days of 90s semi-popular rock music, with a metallic spin. Can't find any fault with that.
By The Klepto at 12:00 PM
Email ThisBlogThis!Share to TwitterShare to FacebookShare to Pinterest
Tags: *Band Submission, #Alternative, #Stoner, Swim The Mind