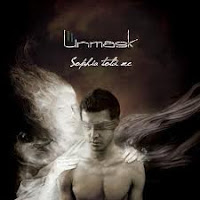 I was going to combine this Band Submission with my Weekly Dose of Prog, but Unmask really isn't progressive enough for me to be included in my weekly segment (or at least not as much as I'd like). It still has progressive tendencies, more-so then any other genre, but they are kind of weakly distributed throughout. Making sure I wasn't completely off-base, I looked up some other reviews of Sophia Told Me that are out there on the web, and most of them call the album neo-prog, new-prog, or alternative progressive, which is about what I'm getting from it all. while the terms neo-prog and new-prog are thrown around sometimes, there hasn't been an agreed upon style or set way that bands fall into these categories, thus I'm only worried about the alternative progressive label, because it's what I feel best grabs the band.

When the group first sent me an email about Sophia Told Me, with a link to some of their music, I initially compared them to an Operation: Mindcrime-era of Queensrÿche. After receiving and finishing the album, I still have to stand by that initial claim, partially because of the style of the album, but mostly because I keep getting flashbacks to the more melodic Queensrÿche songs, especially when there is more than just one vocalist (with the female within "Sleepless Night" being a particular care for this). I'm not directly comparing the two albums, Operation: Mindcrime and Sophia Told Me, but there are similarities within the music that you can't avoid.

Sophia Told Me really walks upon the line between metal and rock; I'm going to include it in the metal category, both here and in my collection, but there are several points when the heaviness of the music lets up and a semi-symphonic tune carries over. These sections are hauntingly beautiful, and musically entertaining, but it's not what I'd call metal. Long-time readers of The Guide know I listen to a lot more them metal, so this isn't truly a gripe, it's just that I was expecting a progressive metal album, and the back and forth between progressive metal and alternative rock is a bit disjointing as a listener.

Unmask has potential, and this a solid debut effort, but I would really like to see more in any following release. Sophia Told Me is a very European-style progressive release (which is good, seeing as they are from Italy), combining heavy metal with symphonic - two very popular styles over there (as I'm told). It's not going to be one of my favorites of the year, but I will listen again, as every review I read has made mention that the album grows on you. We'll see what the future holds for Unmask, and my taste of Sophia Told Me.
By The Klepto at 12:00 PM
Email ThisBlogThis!Share to TwitterShare to FacebookShare to Pinterest
Tags: *Band Submission, #Progressive Metal, Unmask