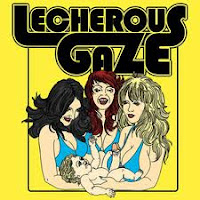 Lecherous Gaze's self-titled EP is a quick, four-track, fifteen-minute rocker, melding stoner rock and punkish themes. Actually I hear a bit of the classic era of punk hidden in there; British acts like The Clash and The Sex Pistols. It's partially in the muddled, over-exposed vocals, and part in the quick guitar and drum rhythms.

The EP seems to be split into two stylistic types; the first half - "Phaze" and "Sold" - fall solidly into the punk/stoner crossover I mentioned above. The licks are catchy and plentiful, the vocals are simple and quick (if not easily understood), reminding me of the 80s heyday of punk. The songs kind of blend into each other, and as I'm not a connoisseur of punk, not the high point of the disc for my ears.

The second half of the album - "Graveyard" and "R 'n' R Lust" - strike a different set of chords, ones more in my direction. "Graveyard" is a bluesy riff-heavy track, where the vocals are more intelligible. It is slower then the previous (although for the last minute of the song it speeds up drastically into a fade out) and gets your head bobbing with the energy behind the guitars.

The last track of the EP, "R 'n' R Lust" (I'm going to say that's short for Rock 'n' Roll Lust, based on the lyrics), is an old-fashioned 60s/70s rocker. It does contain a hint of the punk themes found int he first half of the disc, but this makes the song come off more as psychobilly then anything else. It's a nice ending to the should-have-been-a-LP EP.

Lecherous Gaze's debut EP shows the act's skills and potential. The four-song release crosses into at least three of the sub-genres of stoner rock, with great success in each. While I am a fan of the blues and rock 'n roll tracks more so then the punk ones, every song has some degree of merit. I've got one more track from the band, a Danava/Earthless/Lecherous Gaze three-way split, that I may just have to break into to see what direction that song is. I will be looking forward to their debut full-length, as the group shows major promise.
By The Klepto at 12:00 PM
Email ThisBlogThis!Share to TwitterShare to FacebookShare to Pinterest
Tags: *EP Shakedown, #Stoner, ^EP, Lecherous Gaze