Work's been pretty brutal of late, and as such I'm putting together this week's 'Weekly Dose of Prog' very last minute. This week's isn't going to be a big one, and I'm working hard on getting something of substance out on time (my first draft was very short). As it stands, this will be short and sweet. I'll try to get back on my feet for next week, as I do enjoy writing these. 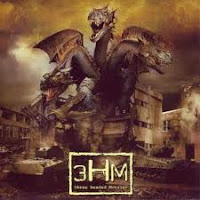 3 Headed Monster was an instrumental progressive metal band that I discovered randomly several years ago. I don't really remember how I found them, or why I would give them a listen above so many other bands (it probably had something to do with the band name and the album artwork). Whatever the case I discovered the act and I am glad I did.

With the many previous instrumental acts I've heard and reviewed here the constant remark I make is whether or not the band in question can pull off being entertaining for the long hall. Some acts can handle this, with consistently evolving melodic progressions and an equally impressive guitar/drum relationship, while others fade out into nothingness, with repetitive riffs and the like. 3 Headed Monster plays on both sides of the fence, with some tracks being very entertaining and memorable, while others simply are not.

Instrumental albums as a rule are a bit hard to review. Songs are good but without a notable reason why, or an adequate way to describe it. The tunes on 3 Headed Monster are like this. These tracks are some good progressive metal, at times coming off more power metal or traditional metal, and at others being more along the lines of thrash. The mix of styles is what makes the album fresh and exciting, where if it was only one it may lag behind.

The best songs are "Varan," "Perfect Plex," "Ultimate Rage," "Bloodbath II," and "Bitter End" although once again it's hard to say with any accuracy. I'm sure if I listened to the disc again I'd pick a different six as my favorites, thus is the crux of the instrumental album.

3 Headed Monster was a decent act on the metal scene. I was periodically checking in on this act, hoping for a new album eventually, but now I see that the group broke up some time ago so the band members could focus on separate acts. So I guess that isn't going to work out. They have a page on Metal Archives which I would assume has some more info, but for some reason the site won't load properly on my computer. I want to see what the guys' new acts are all about.
By The Klepto at 12:00 PM
Email ThisBlogThis!Share to TwitterShare to FacebookShare to Pinterest
Tags: *Weekly Dose of Prog, #Instrumental, #Progressive Metal, 3 Headed Monster