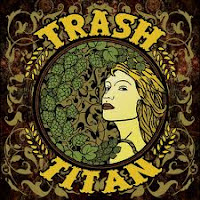 Trash Titan seems like a very accurate name for this group. The music they make is some rough and trashy stoner rock with a huge sound. The songs off of their self-titled EP move between being blues/retro rock and grooving southern rock, with the occasional thrash feeling within the breakdowns.

"Medicine" does a good job of setting the scene; with the southern-tinged rock coming in thick. The second track, "Sunny Day," is where the album begins to take off, where the mix of stoner genres is more apparent. Elements of southern, rock n' roll and thrash all make their play here. This leads to the more subdued but far superior, "Whiskey Love," the high point of the release. This one is straight-forward southern jam-stoner, with a moving rhythm and a entertaining story.

The fourth song, "Push Me Away," sounds like it comes straight from the 80s, in the fashion of a traveling/lost love kind of song. The music is simple but chugging, the lyrics spin another tale for my obvious enjoyment, and it all comes together smoothly. Not as adventurous as some of their other songs, but very enjoyable. This brings us to the final track on the twenty-four minute EP, and probably the most stylistically varied, "Talkin 'Bout You." The last song incorporates a heavy bass line and a pulsing guitar (dual guitars when it comes to solo time), which really lays down the funk. It's still more rock n' roll/retro rock then anything, but the heavy funk themes are obvious and add to the song.

Trash Titan, both the EP and the band, are a great example of the retro rock vein of the stoner genre. It doesn't choose just one sub-sub-genre to excel in, instead opting for three or four, and pulls them all off amazingly. When they release their debut full-length (which you know they will), I look forward to more of the same southern-tinged rock n' roll that was heard throughout this EP.
By The Klepto at 12:00 PM
Email ThisBlogThis!Share to TwitterShare to FacebookShare to Pinterest
Tags: *EP Shakedown, #Stoner, ^EP, Trash Titan