I thought I had written and posted part 2 of Type O Negative's discography long ago - soon after I had posted the first one, in March - so I apologize for the great delay between. I'm just going to use frontman Peter Steele's death in April as my excuse (even though I know that's a load of shit).
Anyway, here's part two: 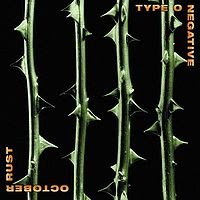 October Rust (1996)
Following up the immensely popular Bloody Kisses, October Rust was pushed by the record label to be more accessible to the average audience. In this trial they both succeeded and failed, with some songs like "My Girlfriend's Girlfriend" and "Cinnamon Girl" (a Neil Young cover, in their usual comedic fashion) are a little more mainstream metal then their past works. On the flip side they continue the trend of having their normal tongue-in-cheek songs; "Red Water (Christmas Mourning)," "Be My Druidess," and "Love You to Death," and then they have their 'throw-away songs,' songs that are not really songs at all. Either they have looping feedback or are some dreary collection of sounds - more like noise or drone then anything else - which are present in most ToN albums, like the long-titled "The Glorious Liberation of the People's Technocratic Republic of Vinnland by the Combined Forces of the United Territories of Europa." It's a selective comedy that the group has, but long-time fans are well aware of this brand of humor and fully expect it. For October Rust, however, it seems to go a bit overboard, with a lot of throw-away songs and joke tracks, it takes away from the album proper. It's as if that with the record company pushing them for something more mainstream, they complied for a handful of tracks and decided to rebel greatly for the others. But what did the record company care? They got their singles, and that's all that matters to them. Regardless, after the stellar success of Bloody Kisses, October Rust was bound to be a sales goldmine, and to a point it was; it sold well and helped the band out, but the trend could not continue with the executives pressing at their backs and their fans pushing for 'classic' Type O Negative, and what would become World Coming Down as the result. 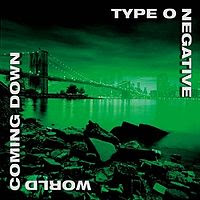 World Coming Down (1999)
As stated above World Coming Down seems to be a backlash of all the pressure on the band for their previous album. Where October Rust was a strive towards a mainstream sound, WCD is a massive push in the opposite direction. This album is the group's most 'doom' album to date, with singer/frontman Peter Steele dealing with a number of losses and death prior to his time in the recording studio. This sound of depression and death can be most obviously heard in the tracks "Everyone I Love Is Dead" and "Everything Dies" (a favorite of mine). Also, in true ToN form, the tracks "Sinus," "Liver," and "Lung" are short bits of the sounds of someone dying, depicted in the method of the song title.
This album is a far throw from most Type O Negative releases, but I like the morbidity. I am a big fan of doom metal, and this being their furthest foray into the genre I am quite happy. It continues the trend of only about half of the album being actual 'songs,' and of those only a handful are actually decent. The two songs I mentioned before, as well as "Creepy Green Light," "Pyretta Blaze," and The Beatles medley, titled "Day Tripper (Medley)" are all examples of this. The rest of the album is easily forgettable. This is my main gripe about Type O Negative; they make good music but it is surrounded by complete tripe. 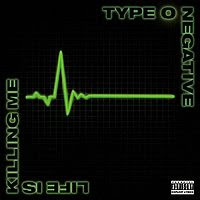 Life Is Killing Me (2003)
After the dredging sounds of their last album, Life Is Killing Me, is a return to the 'tried and true' Type O Negative sound. While still dark and gothy, the upbeat melodies are back, as well as the tongue-in-cheek humor. A much more solid album then many of its predecessors, this release includes very few 'throw away' tracks, instead substituting them for the songs either being 'great' or 'ok' - something that is a usual standard of pretty much every album recorded, but something new for ToN. Not my favorite album, but as I said a solid release; some of the better songs are "I Don't Wanna Be Me," "I Like Goils," "Life is Killing Me," "(We Were) Electrocute," and the humorous cover "Angry Inch," originally from the soundtrack to the off Broadway musical 'Hedwig and the Angry Inch'. It would be four years until the release of their next (and perhaps last?) album, and with the wait were stories of break-ups and deaths of band members - one rumor  which would become real all too soon... 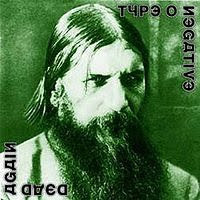 Dead Again (2007)
See my recent post of Dead Again being one of my Favorite Albums.


So there you have it, the finality of the Type O Negative Retrospective. Again, I am sorry it took so long, but I swear I thought I had written this months ago. The only reason I noticed it was missing is when I went back to write the Favorite Albums page for Dead Again. I am deeply saddened by the death of Peter Steele, only over shadowed by the death of Ronnie James Dio. It's been a long summer for metal fans, and I hope the rest of the year treats us better. I wish the group was still together and writing and touring, I would have liked to see them live again once more - but I guess I was lucky enough to see them the one time.

By The Klepto at 1:57 PM
Email ThisBlogThis!Share to TwitterShare to FacebookShare to Pinterest
Tags: *Retrospective, #Doom Metal, Type O Negative