While Peter Steele's first band, Carnivore, was mostly thrash, and later ToN releases are mostly doom, these first couple of albums blend the two to become the center of the sub-sub(sub?)-genre: sludge metal. Sludge metal is characterized by having slow verses or other passages but having thrash-infused choruses or breaks. Basically it's two extremes being mashed together, to varying success

Coming off as more of a collection of Carnivore tracks with a new band, Slow, Deep And Hard is something else. While some elements from this album will be apparent in later releases (especially the humor), other then the next release, The Origin Of The Feces, this has very little of the sound that would become Type O Negative in future releases. One thing I love about this album are the track titles, they are so unnecessarily long and actually pretty funny. The opening track is titled "Unsuccessfully Coping With The Natural Beauty Of Infidelity," which all about a woman who cheats (gets pretty vulgar towards the end), and the equally impressive titled "The Misinterpretation Of Silence And Its Disastrous Consequences" which is nothing more then a minute of silence - that is it, silence and it gets a huge title. While the titles thing is funny, this album is pretty crap overall, the only good track off of it being its first, "Unsuccessfully Coping..." which is over twelve minutes long. This track fully embodies the sludge title, with the beginning seeming like a thrash song, some long droning bits, more thrash, and then just straight metal chanting. It is a funny song, filled with interesting lyrics, although it does get very vulgar at the end, while he describes what she is for being a cheater (alot of four-letter words). Other then track one, this is a throw-away album, not thrash enough for Carnivore, not doom enough to be truly Type O Negative.

Now The Origin Of The Feces is basically a re-release of their first album, with a handful of new songs, but the interesting part is that is is recorded faux live, and by that I mean the band re-recorded their debut release and added the sounds of crowds, banter between the band and crowd, and even a fake bomb threat, all pretty odd. The legend of this release is that after their debut album, their record company gave the group $5,000 to record their follow-up, to which ToN promptly spent most of the money on booze, drugs and hookers. Now if that's not completely metal, I don't know what is. But the group had to record something so they released this 'live' album. It is released like a bootleg, complete with wrong titles for the tracks (mirroring people's need for songs to be named after a line in the chorus); "Unsuccessfully Coping With The Natural Beauty Of Infidelity" becomes "I Know You're Fucking Someone Else," "Gravitational Constant: G = 6.67 x 10-8 cm-3 gm-1 sec-2" is labeled as "Gravity," and "Xero Tolerance" is renamed "Kill You Tonight." It's all pretty funny and a neat idea, but it really is the same album as Slow, Deep And Hard, and suffers the same shortfalls. While it is kind of interesting to hear the songs in different versions (Kill You Tonight isn't bad), it still isn't a really good album. The only saving graces are the Jimi Hendrix cover "Hey Joe" which is labeled "Hey Pete" after frontman Peter Steele, which I added to my 20 Cover Songs list, and on the special edition (which has a different cover, as the original was a grainy picture of Peter Steele's asshole) copy a cover of Black Sabbath's "Paranoid", which is superbly done. But that's it, those two tracks are all that is worth on this album. Check out their later works for better material. 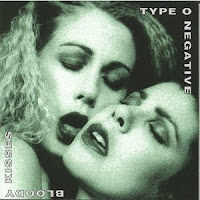 A far step from their previous works, and Type O Negative's claim to fame, Bloody Kisses is by far their best known work. It holds the singles "Christian Woman" and "Black No. 1" both which received substantial airplay in the 90's (and occasionally pop up today). This was the first Type O album I ever heard, and is one of the first metal albums I was introduced to. As such it will always hold a special place in my heart. I would add it to my 'Favorite Albums' list, but it has a lot of throw-away songs, some for the joke perspective, and some are just annoying. They continual downfall of the group I'm afraid (at least until Dead Again). If you're new to Type O Negative, this is the album to start with, as it is their most radio-friendly release (even with their two singles being over 9 minutes long each) and after their next album, October Rust, the group gets really depressive and completely doom.

By The Klepto at 5:45 PM
Email ThisBlogThis!Share to TwitterShare to FacebookShare to Pinterest
Tags: *Retrospective, #Doom Metal, Type O Negative