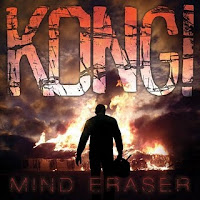 Wow, this band is a punch in the face. I've been listening to a lot of classic and alternative rock lately and switching to something this heavy and crushing was a bit of a surprise. KONG! is a group hailing from North Carolina which seems to want to bring the balls back to underground metal.

As far as I can tell, Mind Eraser is KONG!'s debut EP - I say as far as I can tell because there are at least another half-a-dozen bands out there with that name - and it's an amazing start. While the other reviews I saw qualify the band within the hardcore bracket of music, I'm leaning to more of a New Wave of American Heavy Metal feel. There is some shouting, but it's more guttural then true screams that would go with hardcore. The music itself is more metal then punk, which would move it to metalcore I believe (I think I'm getting this right, I am not a fan of anything -core titled usually), but I still don't see it. The songs are too varied, too filled with ups and downs. Mind Eraser, while filled with energetic music, is not overwhelming with the sound or frantic as much hardcore acts I have heard. They are much more groove-oriented then punk.
Moving from above, the band's sound reminds me more of early Lamb of God or Kingdom of Sorrow. The songs are varied in style, moving from thrash to groove, including sections focusing on vocals only or a simple drum fill with a guitar overlay. My favorite songs are the ones with the most to offer musically: "Classic," "Martial Law," and "Outnumbered." While there are other tracks to enjoy - in fact the whole EP is very much listenable and re-listenable - these few stand out above the rest.

Honestly, KONG!, whether or not Mind Eraser is actually their debut, is a wild ride of a band. It reminds me of the beginnings of the genre of NWOAHM, when the focus was on fury and variance, before all of these cookie-cutter and -core acts bastardized the idea. As with anything that becomes popular, it got too saturated with so-so acts, but KONG! seems to be a return to the golden era of the genre. Hey, I'm interested in them, and I'm not a real big fan of the genre, so that's something.
By The Klepto at 12:00 PM
Email ThisBlogThis!Share to TwitterShare to FacebookShare to Pinterest
Tags: *New Band, #NWOAHM, ^EP, KONG