New Album: Black Stone Cherry - Between The Devil And The Deep Blue Sea 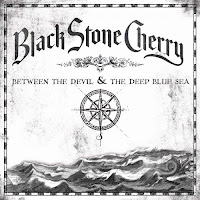 I'm a tad apprehensive listening to Between The Devil And The Deep Blue Sea, Black Stone Cherry's latest album; their debut was amazing, completely top-notch southern stoner metal. It was full of creative songs, powerful is story and vocals, with some amazing instruments to match. The followup, Folklore And Superstition, was a dull, alternative rock with a touch of southern twang release. All the originality of their was gone, and we were left with an empty shell of, what I assume to be, an attempt at being accepted by the majority of the populous. So I am both excited and dismissal of Black Stone Cherry's newest release, hoping that it is a reminder of their origin, not their evolution.

This new incarnation of Black Stone Cherry's sound seems a bit of a pairing of the previous two mentions. It is a little more rough and tumble, and there by a little more metal, but in the same token, it is still filled with obvious song hooks and melodies. The music is entertaining, but nothing is really outstanding or challenging to the listener. There are enjoyable songs, but nothing that made me go "wow, that was cool," or anything that makes me want to show off a song to my friends. It's satisfying but not filling.

In all actuality, Between The Devil And The Deep Blue Sea seems to be trying to combine the fame and fans of bands like Five Finger Death Punch and Kid Rock. Their music is hard edged, but still has the hint of something southern. It's not southern enough for country or true southern rock, but the jump could be made. The best, and most obvious, example of this is "Blame It On The Boom Boom," which is all about getting drunk and blaming the "Boom Boom" for your problems when you wake up. I mean, the music is decent on this track, but the second I heard the chorus I instantly hated it. This is a song that should have been released in 1996, not 2011! I used to think I liked Black Stone Cherry but after songs like this one...

In all seriousness, "Blame It On The Boom Boom" is the worst example I could give. The rest of Between The Devil And The Deep Blue Sea is ok, an album for fans of alternative rock with a southern edge. I could stand listening to most of this again, but not frequently. They do a pretty good rendition of The Marshall Tucker Band's "Can't You See," once again taking a page from Five Finger Death Punch and Kid Rock's book (Bad Company's "Bad Company" and a blend of Lynyrd Skynyrd and Warren Zevon for "All Summer Long," respectively). There is no doubt that there is something to listen to here, but it's a stretch for fans of metal or hard rock.

For me, it's all about how far this band has fallen. Their self-titled blew my socks off, and this... this is nothing in comparison. This is prime example of a band selling out. I'll keep rocking out to their debut, but as far as I'm concerned, Black Stone Cherry broke up in 2007. R.I.P.
By The Klepto at 12:00 PM
Email ThisBlogThis!Share to TwitterShare to FacebookShare to Pinterest
Tags: *New Album, #Southern, #Stoner, Black Stone Cherry

Man, I couldn't agree more. I loved the first one. It was surprisingly good for a mainstream release. I haven't heard the latest one yet, but I hope it's better than the previous. Nice review.

Thanks, yea I'm re-listening to the other two and while the first is a little more rock then I remember, it still isn't nearly as bad as the following two.