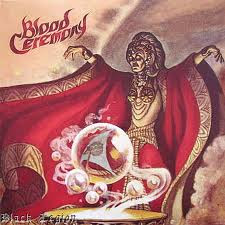 When I first listened to Blood Ceremony's self-titled release I knew I had something special. I had a friend over so I couldn't give it the full listen it deserved, but from the bits I heard I was very impressed. The group seemed to blend doom and progressive genres with some folkish elements with the instruments used. And the vocals, being as haunting as they were, could have been either female or male, it was hard to say. After my friend left, I made a note to listen to this whole album again, a note that got mixed in with the dozens of other notes I had/have about listening to different bands and albums. So this week I finally got to it.

First impressions: I was half right with the thought of blending doom and progressive - both elements are definitely there - but the folk sounds are only there with a Jethro Tull-esq flute playing instead of a guitar solo. The vocals, female, were hauntingly beautiful and went great with the sound of the band. I also detected some stoner influences, but really I always hear that in any doom band that doesn't hold onto the 'classic doom' sound, which is what stoner/doom is really.

While the stand out tracks were the first and last ("Master of Confusion" was rocking, while "Hymn To Pan" was a beautifully long, flute-driven piece), all of the songs held a certain appeal to me. The weaker songs were in the middle of the album, but at that point I had been sucked into the album and all of the songs blended into one-another. So it is very hard to single out one track to another.

If you like your doom light, or if you know nothing about doom, this may be the perfect album for you. This is not a 'heavy' album, but the metal themes are still there, so even a long-term metalhead (such as myself) can find something there. If you think that Black Sabbath could have benefited from Ian Anderson's vocals and themes (the lead singer from Jethro Tull), then this is the group. Obviously I am joking about that, no one would have wanted Sabbath bastardized by Anderson. But if you like both bands (and maybe some 2112-era Rush) then you are ready to take Blood Ceremony on. 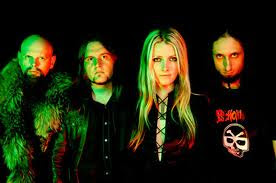