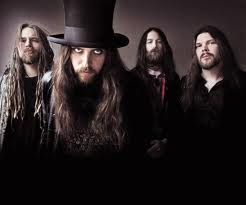 Listening to Last.fm at school, under the 'Dream Theater' tag, Bigelf came up several times and I was impressed with what I heard. I decided to follow this up by 'acquiring' their discography (four albums, not too difficult), and giving the whole thing a listen.
One thing I have to say right out - Bigelf is different. It is solid in the progressive rock genre, but it also mixes in pop-ish sounds and eclectic stylings, giving each album the feel that you're listening to three different bands at once. There is the modern progressive rock sound, something you'd expect from Emerson, Lake and Palmer(their more radio-friendly stuff) or The Alan Parsons Project, then there is the 60's/70's trippy progressive sound, at times you'd swear you were listening to Pink Floyd, and as a final flourish they add in The Beatles, more The White Album era then anything else. Different right?
Listening to their first two albums, I was not expecting to like this band much - there were good songs on each, but they were few and far between. Beginning with Hex, I began to see the evolution of the band's sound, and by the time Cheat The Gallows was up, I was enjoying it thoroughly,
As I go through all their albums (I'm finishing the last one now) I come to realize that I like their music more with each album. In the beginning their sound was raw and un-focused, seeming more pop then rock. But as I move down the list their songs take on more substance and seem to have taken more thought. They are longer and much grander in the overall sound. Hex was more of a The Wall-era Pink Floyd album with quicker tempos and a less spacey sound. Even now, listening to Cheat The Gallows, I can hear a heavy Sgt. Pepper's Lonely Hearts Club Band influence within the project, true with faux-crowd noises and sprawling songs that loop back onto themselves.

If you are bored with the sound of modern progressive rock, and want to try something new and different, all while remaining friendly and remembrance of different styles, I would recommend Bigelf, especially their later two albums. The interesting combination of progressive, pop, and rock elements make it something to hear.

By The Klepto at 8:09 PM
Email ThisBlogThis!Share to TwitterShare to FacebookShare to Pinterest
Tags: *New Band, #Progressive Rock, Bigelf