One of the first power metal bands I had ever heard, Iced Earth used to be one of my favorite bands ever (still a great band, just not as much airtime anymore). Their style of guitar work and vocals (Matt Barlow is a god) was brand new for me, and I still marvel at it to this day. Starting with Something Wicked This Ways Comes in 1998 (my first album of theirs), they have paved the way for the American style of power metal. I am looking forward to their 2011 release. 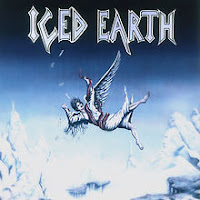 Iced Earth's first representation of their talents, their self-titled album is a long way from what they would become in the following years and releases. This album comes off downright thrash, with only a hint of the power influences, seeming much like early Iron Maiden, Judas Priest or some other NWOBHM band. Almost all of these songs were re-recorded for the album Days Of Purgatory, with the then-new singer, Matt Barlow, on vocals, some came out better, some came out worse. While this is nowhere close to my favorite Iced Earth album, it is not bad in the least. It shows promise and skill, both of which are worked on in later albums to perfection. 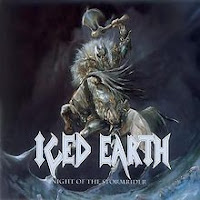 Night of The Stormrider continues right where their debut album leaves off; it is still reminiscent of early NWOBHM bands and still focuses on the relationship between the guitars and the vocals. This album is more melodic then its predecessor, with a little more variance on the sound produced by the group - it's not all quick thrash-influenced metal, but there is actually a difference in tempo between songs and even between verses. Still not their best work, but a step in the right direction. As with their debut album, many of these songs were later re-recorded on the release Days of Purgatory, with Matt Barlow for lead vocals. 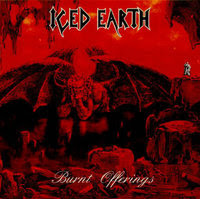 With the addition of the 'voice' of Iced Earth, Matt Barlow, for Burnt Offerings, the band begins to tweak their sound, opting into a power metal-style thrash mix. These songs are still very much thrash oriented, but with the cleaner vocal style of Barlow, the power elements can be heard. As I like the power metal era of Iced Earth this album is not too high on my playlist, and looking at the track list I really can only recall ever hearing one song, even though I know I have listened to the album a few times. It's a transitional album between styles, mostly forgettable, but necessary to get the band where they are now. 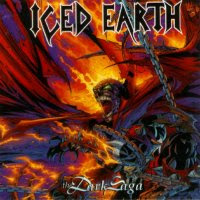 A semi-foolish concept album, The Dark Saga is where Iced Earth is first seen as a power metal band. This album begins the group's history with story-telling lyrics, layered guitars and soaring vocals - all things I love about the band. This is the beginning of the band in my opinion, where their previous works are stepping stones to this 'group.' The album itself is a concept album about the comic book character, Spawn, and his story of death, rebirth and retribution. An interesting idea, but it all seems to fall apart (as far as story goes). A large number of concept albums never quite get their concept across, this doesn't make them bad albums by any means, it's just that the group's envisionment of the ending product is not fully realized. A good and clear concept albums is a hard thing to find, probably one out of at least ten (most likely more), but that's not a good reason why people should stop trying. A fully-utilized concept albums is amazing, worth the risks.

By The Klepto at 4:03 PM
Email ThisBlogThis!Share to TwitterShare to FacebookShare to Pinterest
Tags: *Retrospective, #Power Metal, #Thrash, Iced Earth

I got into Iced Earth after hearing "Jack" from "Horror Show" on a sampler album. I like their power metal style. I'm not too familiar with their earlier work, but I do have "Days of Purgatory". "Tha Dark Saga" has some cool tunes.

I have to admit, that "Dante's Inferno" off of "Burnt Offerings" is probably my favourite Iced Earth song.

And yes, Mathew Barlow is one of the greatest vocalists and one of my favourites.

For me it will always be 'Something Wicked This Way Comes' as their best album (as seen in Part 2). Barlow is amazing, even with Pyramaze.