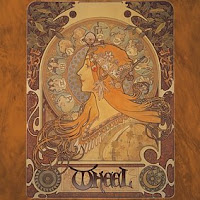 Lately, I've been complaining about the world of doom metal (mostly to myself because I haven't finished the article I'm working on), and the lack of quality in the 'classic' doom sound. As such, and for research for the article I'm working on, I've been trying to find the quote/unquote "best" (I don't know if that saying works in writing) new doom bands/albums and putting them to the test (I'm going to have to try the new Electric Wizard when it is finally released, but I've never been a huge fan of their either). Wheel is one of these new doom metal acts, and have just released their self-titled debut. They've been getting rave reviews, on numerous sites, so I decided to check them out. From my research (as I try to stay informed) wheel was formed in 2006 in Germany by some guys who have been in various bands before (so says The Metal Archives) - but no act that I've ever heard of before. Their band/album/website artwork is pretty cool, very classical and somewhat simple. I like it (--first impressions).
Listening to their album, Wheel treads the thin line between being a traditional doom band, and a stoner/doom band. Most of the songs are straight-forward doom, but from time to time - the second song, "To My Love Departed," especially - the fuzz of the guitar is upped and you have a definite stoner feel/groove pop up. It's not bad really, but I much prefer their straight-on doom works; fortunately this is where they spend most of their time. Their music is very reminiscent of the golden age of doom; where the songs are simple in composition, the vocals are clean and are semi-operatic, and the overall message is one of despair and/or loneliness. Everything I love about doom - real doom - is here, so I know you're assuming that I love these guys and this album, but unfortunately... I don't.
Their songs, while a decent throwback, while in no way bad, are lacking in originality or emphasis. No song truly stands out above the others, which is sometimes a great boast to make, but they all aren't of an amazing quality to warrant this. With exception to the rare albums that are 100% amazing (see my Favorite Albums Page), they need to have this up and down feeling to them. A difference in scope and style, that let's you determine which style of the music you prefer more. In this debut album, Wheel has all the songs just there, with nothing special and with nothing lacking. It's all just ok.
This album is decent though; I'm not trying to paint a picture of disappointment. This album is a return to a style of doom that I feel has been lacking of late, and the songs are epic in nature, but there is just something missing from this equation. It's not nearly special enough to deserve all of the praises the band has been getting of late, but it shows an open-ended possibility. That maybe in the group's next release or perhaps the one after, we will hear something truly remarkable - just not yet.
If you like classic/traditional/epic doom, then give Wheel a try and determine where they stand for yourself. If you're looking for something new and amazing then I would search somewhere else. It's good for a listen, but I wouldn't put it on repeat.

By The Klepto at 12:00 PM
Email ThisBlogThis!Share to TwitterShare to FacebookShare to Pinterest
Tags: *New Band, #Doom Metal, #Stoner/Doom, Wheel