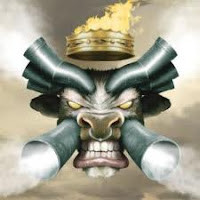 I really like Monster Magnet, being the granddaddies of the modern stoner age and all, it's hard not to. I also like their side project, The Atomic Bitchwax (and that project's side project, Black Nasa - albeit the weakest of the group), with is a more groove-oriented version of the parent band.
I was indoctrinated to Monster Magnet when my father bought their '98 release (and their step into the mainstream), Powertrip. The song "Space Lord" launched the group into unseen heights (before or after really), and introduced them to a whole new audience - myself included. Fast forward a decade, and I'm in college, searching for my own version of musical independence and I come across the albums Monolithic Baby! and Dopes To Infinity and I am blown away. I did not realize that this group was the same that I had heard repeatedly over the past decade being blasted on my Dad's stereo. My hunt for independence has led me back to my beginnings in rock.
If you're a fan of Monster Magnet (like I am) then go and enjoy Mastermind, it sounds as fresh as anything they have put out. It doesn't sound like a band that has been around for almost two decades, instead it sounds like it should be the groups second or third release - wherein they have discovered their sound (as often debut albums are not how the band will sound later on) and are heading into the future in stride - instead of their eighth album. Often other long-time acts sound old and tired at this point, not this band not this release.
The group keeps the habit of blending different styles into their tracks, with some songs being devoted to heavy metal ("Gods And Punks"), while some take a step back into groove-rock ("Bored With Sorcery"), and just a handful go into a light and semi-psychedelic sound ("The Titan Who Cried Like A Baby"). While I think their metal songs are the best, several of the rock songs are great. The ups and downs with this unique style really make the good songs stand out. This means that none of their albums will ever be labeled as 'Amazing,' but none of them will be called bad, and I think that's a fair trade.


Stand out songs include "Hallucination Bomb," "Gods And Punks" (their first single of the album), "Mastermind," "100 Million Miles," "Time Machine," "When The Planes Fall From The Sky," and "Ghost Story." The rest of the album is ok, I'm sure everyone will find their own group to like, but I didn't like "The Titan Who Cried Like A Baby" it was just too light, and not at all with the rest of the album in style and quality.