I recently went on a road trip back to my parents' place, just over three hours away, and on the way I rotated my iPod through different bands' discographies; Clutch (a constant staple), Turisas, the funk genre, and Flogging Molly, all saw some valuable air-time (currently on Manowar). But what was memorable to me was how long the Flogging Molly playlist was. You see, I only put songs on my iPod that I've listened to previously and have ranked them five stars. This stops it from being filled with a bunch of crap or boring instrumentals or spoken tracks, but it also means that my collection is very eclectic, with several artists only having one or two songs in their list. The reason Flogging Molly was so long, was because I like almost every song they have. After I got home I looked through my iTunes and saw that out of their four studio albums, I only dislike six songs. This caught my eye enough for me to want to write a career-spanning article about them (in three parts): 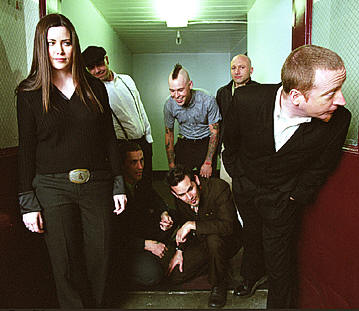 Before forming Flogging Molly, Dave King, the singer, was the vocalist for the heavy metal band Fastway (featuring guitarist "Fast" Eddie Clarke from Motörhead) in the 80's, later fronting the hard rock band Katmandu in the early 90's. After Katmandu disbanded, King retained his contract with Epic Records and began work on a solo album, but when the record company opposed his idea to add traditional Irish instruments to the music, he was able to negotiate out of his deal, and began creating a solo band soon after.
In 1993, King began playing at a Los Angeles pup called Molly Malone's, playing quick-punk music with a Celtic sound. He was joined by guitarist Ted Hutt, bassist Jeff Peters, and fiddliest Bridget Regan, and they began writing the music that would eventually be recorded on their debut live album, Alive Behind The Green Door. Hutt soon left that group, but he was replaced and others were added, to give the band a "fuller" sound.
Their live album came out in 1997, which is when the group decided on a name. In an interview with Kerrang! Magazine, King stated that the name comes from the pup (Molly Malone's) that supported them for years, "We used to play there every Monday night and we felt like we were flogging it to death, so we called the band Flogging Molly." Soon after the release they were signed to SideOneDummy Records, after record exec's saw their live show and noticed their intensity.

To date, Flogging Molly has released an independent live album, Alive Behind The Green Door, an online-only live EP, Complete Control Sessions (2007), four studio albums; Swagger (2000), Drunken Lullabies (2002), Within A Mile of Home (2004), and Float (2008), and an acoustic/live DVD/CD combo, Whiskey On A Sunday (2006).
By The Klepto at 10:06 AM
Email ThisBlogThis!Share to TwitterShare to FacebookShare to Pinterest
Tags: *Retrospective, #Folk Rock, Flogging Molly