EP Shakedown: The Helldozers - My Anger 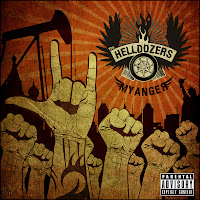 The Helldozers are a southern stoner/sludge act, who have been nice enough to release their debut EP, My Anger, for free off of their website (both in MP3 and FLAC for those huge music nerds out there). Their style is slightly reminiscent of early Down, with a heavy groove sound with some rough (but understandable) vocals. For someone who isn't wholly on the guttural style of singing, as I've stated many times before, it took me a little bit to get on board with it all, but by the end of the first track off of the EP I was happily engaged.

The release begins with "My Anger" which may or may not be live, there are live sounds but you never know nowadays whether or not they aren't added in. The song takes a while to take off, or perhaps it was the time needed for me to get used to their style (see above), but either way it ends strong and is easily enjoyable. The following song, "I'am What I'am," has a really catchy chorus and some good music to go along with it, but sounds like something is missing from the equation. "Seven Seas," the following song, is a really groove-metal, circa 1990-era thrash. It's quick and heavy, but not so frantic as the 80s thrash was, more mature and tuned down for effect. A really good end of the first half of the record.

Beginning the second half, "Back To Hell" is the most stoner-oriented track on My Anger thus far. It's much slower then the previous tracks, and the vocals are the cleanest heard yet. It's much more calm and laid back then most of the record, and get my vote because of it. If you are a fan of the rough vocal style fret not, it's back in spades with the next song. "Real Man" returns to the style that was prevalent within the first pair of tracks; the chugging guitars and drums with shouted vocals. It falls upon the same sword as "I'am What I'am" wherein it has some really catchy bits but fails as a song all together. The final track that The Helldozers offer us is "Sinner," which continues the rough vocals style, but this time adding in so much musically that it seems a mile from the song before. It reminds me of Blind Dog in a way, and if I haven't said so before, I love Blind Dog, so that's nothing but praise right there.

The Helldozers release a pretty damn solid EP, with every song enjoyable on some level. I only dock a couple of the tracks off of My Anger some points solely being compared to the rest on the EP. If they had been released separately they would rock hard, but knowing that the act can do better makes me mark them off a bit, but it's no great failing of any kind. If you have a chance to their website and check them out, download the EP, and leave some love for the group. I know I will.
By The Klepto at 12:00 PM
Email ThisBlogThis!Share to TwitterShare to FacebookShare to Pinterest
Tags: *EP Shakedown, #Sludge Metal, #Southern, #Stoner, ^EP, The Helldozers

Hey Klepto. Here is Tony from The Helldozers. Thanks for nice review!
Wir have placed this review at our Reverbnation Page (http://www.reverbnation.com/helldozers)!

Cool Tony, I'm glad you liked it. Keep me informed with any new music you guys release and I'll be more then happy to hear what you've got.

Hey Klepto. Our new 3 track Maxi-CD "Revolution" is out and available as a free download on our homepage. And again, as with our EP "My Anger" from 2011, we'd love you to share our new songs with your friends, you're absolutely allowed to copy our songs, burn them to CD or whatever you want, no strings attached. http://www.helldozers.com/music.html