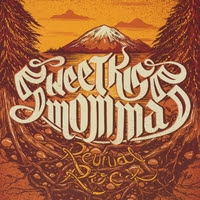 Dirty south stoner rock. I could end the review right there and be satisfied with the ending result, cuz that's all you need to know. What? You want more? Damn the things I do for you people...

Ok, SweetKiss Momma, another band submission I've been putting off (but this one isn't so bad, it's only been a week or so), and yet another one I wish I hadn't. Their style of modern classic southern rock - with both jamming rock songs, and mellow and soulful ballads - really is something that you don't hear every day, especially this well. Revival Rock, their debut release, has been making waves around the world, hitting the Top 10 of CD Baby's overall sales chart a few times within the past year (with the 250,000+ artist on there, that's quite an accomplishment), and I believe it should be at number one at least once!

The problem with someone such as I reviewing an album like this, one strongly in the 'southern' aspect - especially one that plays 'revival rock' -  is that I don't listen to much that follows suit. Anything that I try to compare SweetKiss Momma to is going to be obvious and not that well fitting. I don't have the experience of the hundreds of artists and styles to draw from like I do with stoner, or more straight-forward metal. So keep that in mind.
What immediately comes to mind, once I start Revival Rock, is Black Stone Cherry. They are another modern southern rock band that gets hemmed into the stoner category because it's the easiest fit. While SweetKiss Momma is a little more chill then Black Stone Cherry, it's the strongest comparison to anything modern that I can make. Going further back, the relationships to The Allman Brothers and Lynyrd Skynyrd are blatant (again I'm sure there is a better band out there but I don't know it). I also detect a hint of Ted Nugent, the blending of hard rock and southern is what does it I think. Anyway, that is what I pick up from SweetKiss Momma. It's not a great fit, nor list of comparisons, but it's the best I can do.

With songs ranging from rock to blues, all with strong southern overtones, SweetKiss Momma put out some killer music. Revival Rock is just that, a reminder of the golden era of rock 'n roll, something that any fan of 70s classic rock can appreciate. I know this album just came out, but I'm chomping at the bit for more already! Seriously, go pick this one up.
By The Klepto at 12:00 PM
Email ThisBlogThis!Share to TwitterShare to FacebookShare to Pinterest
Tags: *Band Submission, #Southern, #Stoner, SweetKiss Momma